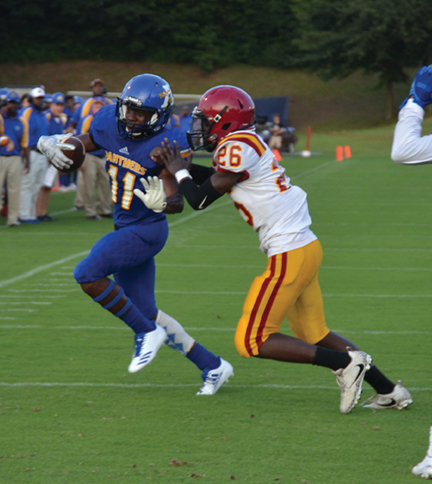 PHOTO BY DONNELL SAMUEL: ASHS’ Sage Finch attempts to fend off a Dooly County tackle during the Panthers’ Sept. 1 match-up against the Bobcats in Americus.

The Americus-Sumter High School (ASHS) Panthers took the field on the evening of Sept. 1, looking to redeem last week’s heartbreaking loss. As the sunset and the summer temperature dropped at Alton Shell Stadium, the seniors of Americus Sumter turned up the heat on the visiting Bobcats of Dooly County, earning a 33-14 victory over their opponents to bring the Panthers’ record on the young season to 1-1.
To open the action, junior quarterback, Keirston Harvey, connected with senior, Kobe Lewis, on a seam route against man coverage and Lewis did what he does best; make big plays after the catch.
The big gain set up a first and ten in the red zone for the Panthers. A couple of plays later, senior receiver, Sage Finch, picked up where he left off in the season opener by being dependable with his route running and catching as Harvey found Finch for the first score of the night, and Finch’s first touchdown reception of the year.
A two-point conversion attempt was successful and the Panthers took an early 8-0 lead over Dooly County.
ASHS’ defense took the field looking to dominate and they just that in the first half, not letting Dooly County sniff the red zone once.
ASHS senior nose tackle, Keunta Holley, got things going for the Panthers’ defense as he led the surge to create a turnover on downs, giving the ball back to the Americus offense.
Linebacker, Mikal Douglas, set the tempo early for the home team’s defense, coming up with a big second-down sack. On the very next play senior linebacker, Tyler Tyson, nailed a Bobcat running back in the back field as Dooly County attempted to set up a screen play.
Braelin Williams, a senior wideout, had a productive first half with two big receptions, one of which was a wide receiver screen that saw Williams ran over multiple Bobcat defenders for a big first down.
Lewis would join the party by ripping off a huge gain sprinting down the left side hashes before being tackled in Bobcat territory.
A few plays later, Douglas blasted through the middle and exploded into the end zone, putting the Panthers up 14-0.
Douglas kept the momentum going with a big sack, putting more pressure on the Bobcats late in the second quarter.
Looking for life, Dooly County tried to sneak past the aggressive Panther defense on third and long but Tyson sniffed it out with a big hit on the ball carrier, sending Americus Sumter to the locker-room leading 14-0.
Out of halftime, the Panthers looked to put the nail in the Dooly coffin with a squib kick that the Panthers recovered on the Bobcats’ thirty-six yard-line. Not long after, Lewis was given the carry as he cut back on the Bobcat defense to sprint ahead and was pushed out of bounds on the Panthers’ nineteen.
Lewis finished off the drive by plowing through the defense to give Americus Sumter a commanding 21-0 lead.
It looked as if the Panthers were going to run away with the game but a late interception in the third quarter by the Bobcats kept Dooly County alive.
The momentum shifted after a penalty was called against the Panthers.
Bobcat quarterback, Jarquavius Brown, threw up a prayer and it was answered off a deflection into the hands of a Dooly receiver to narrow the gap to 21-7. A fumbled snap on the next drive by the Panthers stalled the drive and placed the ball back in the hands of the visitors. Brown would scramble for a big gain, keeping the momentum going for Dooly County and setting up another touchdown to push the score to 21-14.
A short kickoff by Dooly gave the Panthers excellent field position and ASHS was ready to put the game to rest, using the legs of Lewis. Lewis proceeded to pick up a big first down on the ground.
ASHS head coach, Erik Soliday, looked to Lewis again on fourth and three and Lewis pounded the rock for a first and goal.
AJ Payne plowed away from the Bobcats to make it a 27-14 ballgame late in the fourth quarter. Lewis added another touchdown to seal the deal as the Panthers picked up their first win of the season with the final score of 33-14.
Catching up with Soliday after the game, he said, about the performance of his team “We need to be more mentally focused then we were tonight.” When asked about the performance of his seniors Soliday simply replied “They’ve been playing since they were sophomores and they have to lead this team in order to compete at a high level.”
Next week, Americus-Sumter will be traveling to Lee County to take on the Trojans.