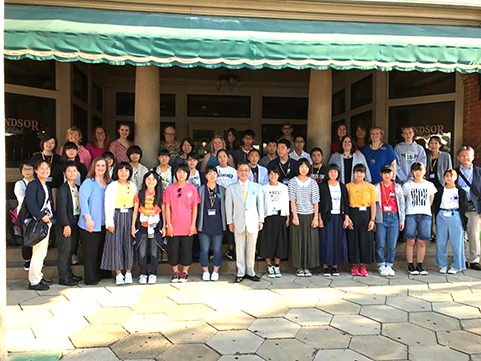 AMERICUS — Students, teachers and city representatives from Konu, Japan, Americus’ sister city, had a history lesson on Americus and Sumter County during their visit Aug. 19-24 as part of an annual exchange program that began more than 20 years ago.
Konu and Americus, separated by two continents, formed a strong tie that grew out of an act of kindness extended by former President Jimmy Carter. In his promotion of peace, Carter was instrumental in saving the temple bell of Shoganji Temple in Hichi of Konu town, Japan. The bell survived World War II without being melted for weapons. Today “The Bell of Hiroshima” is now displayed at the Carter Center in Atlanta, as a symbol of peace and a gift of appreciation from Konu town. The replica, given by Carter, hangs at the original temple for visitors to ring for peace
“The annual visit of the Konu, Miyoshi City Japanese delegation was an extraordinary success with 23 students enjoying the hospitality of Americus homestay families and a culturally enriching flurry of activities from boating on Lake Blackshear, to eating at Roman Oven, to a pool party at the home of Sylvia and Donnie Roland, to playing American board games, and much, much more,” said Karen Kinnamon, English teacher at Americus-Sumter High School and active in planning their visit with the committee chaired by Gayla Braziel.
“Both students and adults with the delegation experienced Americus hospitality at its best and shared their smiles and playful spirits with us,” said Kinnamon. “The most playful among the adults was Miyoshi City’s own Superintendent of Education, Tomoyoshi Matsumura, who left many smiling with his joyful appreciation, including Torrance Choates, superintendent of Sumter County Schools.”
Other school officials traveling in the contingent were the principals of Konu Junior High School and Joge High School, and two teachers, one of whom served as a translator.
“The partnership between Americus and Konu and Miyoshi City is beneficial to both cities,” said Sylvia Roland, Sumter County school board member at large. “We get to experience each other’s culture, get to know both cities, and continue to grow and learn. I look forward to seeing how this partnership evolves.”
She said, “Having the opportunity to stay in a Japanese home (last spring) and experience their culture in such a personal way was beautiful. Getting to host Japanese students was a fun experience and one I hope to repeat.” Last May Roland was among the Americus contingent that traveled to Konu, Miyoshi City on the annual exchange along with board members Alice Green and Edith Ann Green, and teachers Kinnamon, Kizzy Clayton, Aisha Evans, and Braziel, director of the system’s federal program.
The Japanese delegation was officially welcomed at an opening ceremony at Rees Park while the following day featured an extensive tour throughout Americus and Sumter County. Tour highlights included visiting Americus’ historic business district with stops at the Welcome Center, Habitat for Humanity Global Village; tour of the Rylander Theatre; tour of Café Campesino roastery; Americus Fire and Police Departments at the Russell Thomas Jr. Public Safety Building; the Rosalynn Carter butterfly garden on the campus of Georgia Southwestern State University where the director of GSW’s International Program extended a warm welcome. They also visited Koinonia Farm, where they watched the solar eclipse with safety glasses.
The cultural exchange continued the next day with a visit to Carter’s Boyhood Farm near Plains followed by a traditional southern lunch at ASHS where they were entertained by the school chorus and jazz band and a guided tour of the campus. They also visited Sumter County Intermediate School and performed a traditional Japanese dance and karate demonstration for the sixth-grade students. Later, they hand-painted “memory” rocks.
After saying farewell, the Japanese contingent traveled to Atlanta where they toured the Carter Center and the King Center before they returned to their country.
Homestay families included Sylvia and Donald Roland, Donnie and Angie Smith, Diana Malacara, Travis and Shaceda Mansfield, Susan and Mike Ruckman, Wayne and Gia Sandwich, Michael and Kizzy Clayton, Natasha Lewis, Susie and Don Nordwall and Josue and Diane Aparicio. Local translators were Yuka Tomlinson and Michiko English.
The adults in the delegation were entertained at a number of social events, including dinner at Rosemary & Thyme at the Windsor Hotel with school administrators and board of education members; a supper party at the home of Americus Mayor Barry Blount and his wife, Tami, and a dinner party at the home of Charles and Kim Christmas, co-hosted by Chris and Meg Usrey.