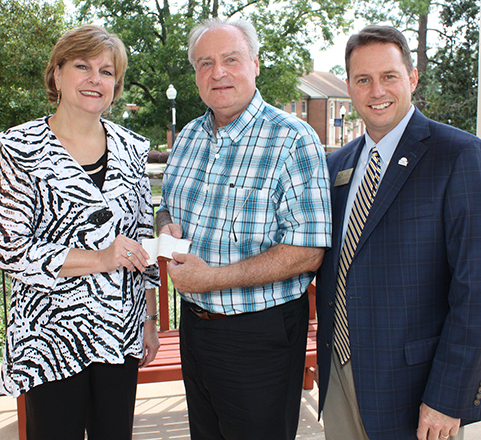 AMERICUS  — Harold Isaacs, Ph.D., the late professor emeritus in history, spent nearly 50 years on the campus of Georgia Southwestern State University (GSW). A beloved and respected member of the GSW community, Isaacs’ legacy will live on for generations to come thanks to a bequest that was recently finalized worth more than $600,000.
In addition to providing need-based academic scholarships for history and political science majors, Isaacs’ planned gift will benefit GSW study abroad programs, the Harold Isaacs Third World Studies Collection, the Harold Isaacs Third World Lecture series, and the University’s Third World in Perspective Program Seminar Series.
“It is a pleasure to accept this gift on behalf of the GSW community from the estate of Dr. Harold Isaacs,” said GSW President Neal Weaver. “Though I never had the privilege of meeting him, his passion for the University and his work are evident in the legacy he has left for us to continue. His desire to continue the work of Third World

The late Harold Isaacs after receiving a Regents’ Hall of Fame Award from the University System of Georgia.

Studies and to give students the opportunity to experience the world through study abroad will be fulfilled through this generous gift. I also would like to thank Dr. Isaacs’ friend and colleague, Dr. Gary Kline, for his work on this bequest. Both he and Dr. Isaacs will always be a part of the Georgia Southwestern family.”
Isaacs joined the History and Political Science Department faculty at GSW in 1965. In the 1980s, Isaacs founded the Association of Third World Studies, an international organization which is now called the Association of Global South Studies. He also founded an international publication named the Journal of Global South Studies, which is now published by the University Press of Florida. The association has hundreds of members across the U.S., Europe, Asia, Africa and Latin America. The journal reaches libraries and subscribers in all of the areas, as well.
After 40 years at GSW, Isaacs retired in 2005. He continued to teach part-time until 2014, bringing his service to the University to just under 50 years. Isaacs died in the summer of 2015. Kline, one of Isaacs’ closest friends and colleagues and a professor emeritus in political science, served as the executor of Isaacs’ estate.
“Dr. Harold Isaacs came to teach at Georgia Southwestern in the fall of 1965, and he taught every semester for the next 49 and a half years, until he was diagnosed with pancreatic cancer in the fall of 2014,” said Kline. “He loved this university and he was loved by students, faculty and staff alike. He was a true educator.
“Sadly, he passed away in July of 2015,” added Kline, “but as his last act of love, he left the bulk of his estate to GSW and requested that the funds be used to continue his educational programs, to support study abroad and for student scholarships at the university. So, in a very tangible sense, Dr. Isaacs and his legacy will be with us for many, many decades ahead.”
Prior to his retirement in May 2005, Isaacs was honored as an inaugural recipient of the University System of Georgia’s “Regents’ Hall of Fame Award.” In December 2014, the conference room of the History and Political Science Department was named in his honor, the “Isaacs Conference Room.”
“Dr. Isaacs was always supportive of GSW in so many ways, including through the GSW Foundation, over his many years on campus,” said Reda Rowell, GSW Foundation executive director. “With this bequest, his love of Georgia Southwestern will live on into the future and serve as a source of encouragement and support to GSW students.”