Raiders keep streak alive with 51-0 win over Terrell; jump to 5-0 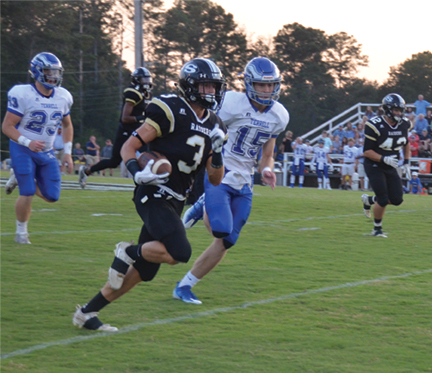 PHOTO BY CARLA CLADD: Southland Academy’s Townsend Ray opens the scoring in the Raiders’ Sept. 8 game against Terrell Academy with a 51-yard touchdown rush in the first quarter.

AMERICUS – The 4-0 Southland Academy Raiders had only one thing on their mind on the evening of Sept. 8 when they took the field at Harvey Simpson Stadium, and that one thing was to become 5-0.
True to their form, the Raiders did just that, earning a 51-0 victory over the visiting Terrell Academy Eagles.
The Raiders wasted no time putting their foot on the neck of the visiting Eagles, holding them to a three and out on Terrell’s opening drive. A few plays later, Southland senior Townsend Ray took the handoff on a reverse and scampered down the Southland sideline for six. A successful two point conversion put the Raiders up 8-0.
Terrell Academy would try to respond with a few big runs that moved the ball into Southland territory, but the dominate defense of the Raiders put an end to the Eagles’ drive, forcing a turnover on downs.
The sophomore workhorse, Clay Owens, took on the load of carrying the offense in the first half, literally. Owens took a toss on the right side put his toe in the ground and cut up field blowing past defenders only to be tackled inside the red zone setting up a first and ten for the Raiders.
Senior quarterback Alex Roach searched for senior wide out Sage Batten for the fade route in the corner of the end zone, and Batten was there for six more as the Raiders’ lead extended to 15-0.
Terrell Academy was faced with another fourth down and elected to go for it, but junior defensive end Chandler Studdard had other plans as he batted down the pass at the line of scrimmage forcing yet another turnover on downs.
With the Raiders facing third down, Roach looked back to his big target, Batten, for a big third down conversion that set up a back breaking run by Brody Shattles that led the Raiders to find the end zone off a quarterback sneak.
After the Raider defense forced another turnover on downs inside Terrell thirty, Clay Owens picked up where he left off, busting through the seam for his second rushing touchdown of the first half and elevating the Southland lead to 30-0.
On the very next possession, Chandler Studdard kept the defensive dominance going by not only intercepting the attempted screen pass by Terrell quarterback, Matthews Ivey, but also returning it for a touchdown giving the Raiders an impressive 37-0 lead in the second quarter.
To add insult to injury, on the very next Southland drive, Roach feigned a play-action to Shattles, only to find Townsend Ray deep down field on a corner route, setting up first and ten on the Eagles’ thirty yard-line.
Shattles capped off the drive with his second touchdown run of the half, sending the Raiders into the half-time break with a 44-0 lead.
Coming out of halftime, Studdard continued his dominance on the defensive side of the ball, collecting a sack to force another three and out for Terrell Academy.
Things just continued to go the Raiders’ way as a fumble occurred on a Terrell keeper that was scooped up by Batten, who ran it in for a touchdown, creating a 51-0 lead.
Southland went on to put it in cruise control for the remainder of the game as they easily walked into their fifth win of the season, keeping their undefeated record intact.
Owens set the pace for the Raiders on the ground, covering 125 yards on nine rushes. Ray added 63 yards running on four totes, followed closely by Shattles, with 52 yards on a pair of totes.
Batten led the Raiders’ receivers with two catches for 34 yards, with Ray right on his heels, pulling down one pass for 33 yards. Roach found his receiver on four of five pass attempts. Chandler Studdard added a 30-yard interception return.
In total, the Raiders collected 415 all-purpose yards, 353 of which came on the ground.
Southland’s experienced defense held the Eagles to only 113 total yards in the match-up.
The Raiders will lay their record on the line again on Sept. 16, traveling to Atlanta to battle the Holy Spirit Prep Cougars.
The Raiders will return to Harvey Simpson Stadium in Americus on Sept. 22 to open Region 3-IAAA competition against the Tiftarea Panthers.