Southland Lady Raiders jump to 8-5 with wins over Westwood, Deerfield 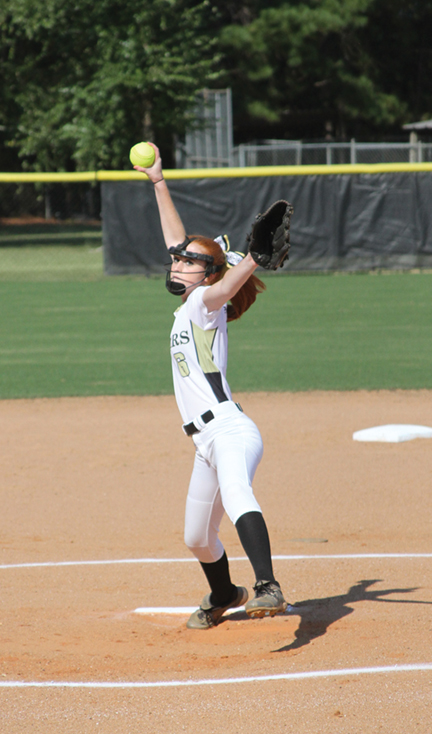 MICHAEL MURRAY I ATR: Southland’s Brittney Tyler winds up to throw some heat during the Lady Raiders’ Sept. 5 tilt against Westwood in Americus.

AMERICUS – The Southland Academy Lady Raiders returned to their home diamond this week to take on non-region foes, the Westwood Academy Lady Warriors, on Sept. 5 before hosting longtime Region 3-IAAA rivals, the Deerfield-Windsor Lady Knights on Sept. 7.
After earning a 6-1 victory over the Lady Warriors, the Southland squad geared up to deal a 9-0 defeat to their Deerfield guests two days later.
With these two wins on the books, the Lady Raiders improve their overall record to 8-5. Southland is currently 3-1 in Region 3-IAAA competition.
In the week’s opener against Westwood, the Lady Raiders jumped ahead early in the first inning after the home team’s determined defense held the visitors to only four at-bats.
When the Southland ladies returned to the dugout in the bottom of the first, Alli Dent got the ball rolling when she reached first base on a Lady Warrior error. Southland’s Savanna Swann followed suit, taking off for first base on a wild pitch as Dent scrambled to second.
When Holly McCain stepped into the batter’s box, Dent exploited yet another visitor error; an errant throw to the Westwood pitcher, to cover the final 120 feet between second base and home plate as Swann took off for second base.
With the Lady Raiders up 1-0 early in the match, McCain proceeded to belt a double into deep centerfield, allowing Swann to complete her round trip and toss another mark on the home side of the scoreboard.
Sara Beth Storey followed with a sacrifice to push McCain to third, where she would see the chance to make her way home on another wild Westwood pitch.
With a 3-0 advantage, the Lady Raiders eventually returned to the field, but not before designated runner, Carson Clements (substituting for pitcher, Brittney Tyler) came within striking distance, showing off her speed to steal a pair of bases and make her way to third.
It was three up, three down in the top of the second, with Tyler recording her second strikeout of the game before McCain and Reese Roland pulled down flies to send the hosts back to the dugout.
Dent opened the inning, laying down a strategically-placed bunt to take first base and Swann followed up with a hard swat to centerfield, pushing Dent to second.
Olivia Perry then picked up her bat to nail a hard double deep into the outfield and plate Dent for a 4-0 Southland lead.
The rally continued when Storey followed with an identical shot, giving Laney Griffin (pinch-running for Perry) plenty of time to scamper home, adding another run to the Southland tally.
As Tyler was busy drawing a walk, Storey saw the chance to take off for third base on another wandering pitch and soon completed her trip, leaving the Lady Raiders on the business end of a 6-0 lead.
The game would remain scoreless over the next three innings, which were highlighted by an exciting double play in the top of the fourth when McCain snagged a line drive and fired the ball off to first to beat the Westwood runner back to the bag, and an attempt by Dent to cover two bases on a sacrifice bunt, which was nearly successful, though the Southland speedster was narrowly picked off sliding into the bag.
In the top of the sixth, the Lady Warriors dodged the shutout when, with two outs on the board, a runner came in from second base, bringing the score to 6-1, where it would remain for the remainder of the game.
Tyler and Swann split duties in the pitcher’s circle for the Lady Raiders, with Tyler tossing the initial four innings and Swann coming in for relief in the fifth.
Tyler struck out a pair of batters and gave up one hit. Swann fanned three batters, giving up one hit and one walk in the match.
Storey set the pace for the Lady Raiders in the batters’ box, contributing a double, a single, and a sacrifice to the victory. Perry collected a double and a single and McCain added a double and a walk. Swann contributed a single and a sacrifice while Roland added a single and a steal. Katie Rogers connected on a single.
In the match-up against Deerfield-Windsor, the Lady Raiders, once again, came out swinging to toss a trio of runs on the board in the initial inning. Southland sparked another rally in the bottom of the third to add six more runs and carefully guarded their lead through the fifth inning to earn the run-rule victory.
Statistics for the Deerfield-Windsor match-up were not available at press time.
Southland’s ladies will return to action on Sept. 11, putting their skills to the test against Westfield School in Americus.