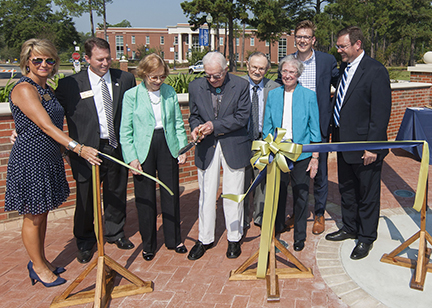 AMERICUS — In a special ceremony Friday, Georgia Southwestern State University (GSW) honored former President Jimmy Carter, who attended GSW in 1941-42.
On Feb. 13, 1942, four freshmen identified as possessing strong leadership skills etched their names in the wet cement of the newly constructed driveway of the Wheatley Building: Bill Davis (DeSoto), John McCrea (Atlanta), Bob Logan (Quitman) and Jimmy Carter (Plains). Jimmy Carter would later become the 76th Governor of Georgia and the 39th President of the United States. In 2014, the cement etching was removed from the driveway to preserve it for future generations of GSW students. GSW dedicated its new signature landmark — the “Presidential Plaza” — located at the main entrance to campus on Friday.
In his welcoming remarks, new GSW president, Neal Weaver, Ph.D., referred to Carter as a student “who would become a husband, father, naval lieutenant, Governor of the great state of Georgia, the 39th president of the United States President and a Nobel Peace Prize winner.
“We are honored to have former President Jimmy Carter and Mrs. Rosalynn Carter with us today. As you all know they have made service their life’s work with organizations like The Carter Center and the Rosalynn Carter Institute for Caregiving which … we’re proud to host every single day … ”
Weaver introduced other special guests, family members of former GSW President Peyton Jacob, who served the institution from 1934-1948. They are James and Margaret Fite, Jacob’s granddaughter; her son, Mark Fite and his son, Peyton James Fite, named for his great-great-grandfather.
Jimmy Carter, as featured speaker, recalled his old college friends whose names are etched in concrete alongside his at the entrance to Georgia Southwestern State University (GSW). He said he used to date the sister of Bob Logan, from Quitman. He also said he thought the reason he was chosen to write his name was because he was the laboratory assistant for a professor at that time who taught physics, chemistry and astronomy. While the professor drilled cadets weekly, Carter taught the home economics class in his absence, a class of all girls. Carter, using his signature wit, said he really enjoyed teaching that class.
“Georgia Southwestern wasn’t my only destination at that time,” Carter said. “I’d wanted to go the Naval Academy since I had been, five or six years old,” He said he always wanted to be a naval officer. 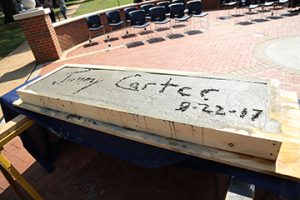 President Carter signed his name in a new piece of cement that will also be placed in the Presidential Plaza.

In his second year at GSW he was appointed to Annapolis, a year in advance. He figured he’d go to Georgia Tech and get a little more advanced mathematics. He attended Tech for a year and then went on to the Naval Academy. Later he went to Union College in New York, for graduate work in nuclear physics.
“I’ve always had a very close attachment to Georgia Southwestern College,” he said. “It meant lot to me.”
One of things Carter did when got the Nobel Peace Prize was to donate “a good portion of it” to GSW, “because I felt like that was the basis for my education in general, not only in physics, chemistry and mathematics, but also in how to just along with folks.”
The former U.S. president recalled that his days at GSW were during segregation, and having grown up in the Archery community, just outside Plains where all his neighbors were African-American, “I had seen the downside of racial segregation. That, plus my experience here at Georgia Southwestern and the leadership of Dr. Peyton Jacobs is what made me become a champion of human rights.”
While in the White House, Carter said he had two ambitions: to keep this country at peace and to be a champion of human rights. “While I was there, we never launched a missile, or dropped a bomb or fired a bullet … I hope we can return to that in the future,” he said.
“I’m very grateful for everything that Georgia Southwestern has done,” he said, recalling that when he first got to the State Senate, before he was governor, his only request was to be on the education committee. He said it was a new Senate, having been inaugurated in 1963, after he was elected in 1962. He asked to be on the university subcommittee, which he chaired. His number one goal in his first two years in the Georgia Senate, he related, was to get a four-year college in Americus, being that Auburn University was the nearest one at that time.
He said that Bo Callaway was serving on the Board of Regents at that time and was going to make the decision while he was chair on a selection committee on which school would become a four-year college. Carter said Callaway wanted Columbus College to be the first, but then-Governor Carl Sanders, an Augusta native, wanted a dental school in Augusta.
“I had the bill in my pocket,” recalled Carter, “and when Sanders would come to me and say ‘I want you to help me get a dental school in Augusta,’ I would say, ‘Governor, I’m fully in favor of it, but I want a four-year college in Americus, Georgia.’ He said, ‘Well, Bo Callaway wants one in Columbus.’ So, we had a struggle for a number of months and finally I prevailed … and it’s now become a university, with the fullest curriculum you could want in this area, with a wonderful legacy of …  continued progress. For that I’m very proud, and that I was able to help a little bit financially with my Nobel Prize money … and I’m particularly glad that I inherited a wife that also attended Georgia Southwestern College.”
The Carters have been married for over 71 years.