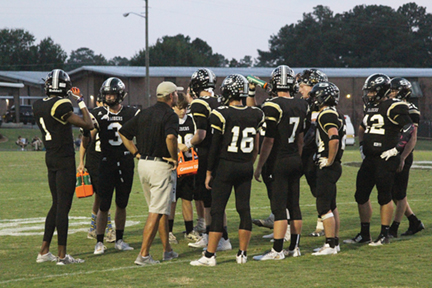 MICHAEL MURRAY I ATR: Southland Academy head coach, Rod Murray, addresses members of the Raiders during a break in the action on Sept. 22 as the Raiders took on the Tiftarea Panthers.

Editor’s note:
There was something in the air this weekend. From early Friday evening until late Sunday afternoon, the good news just kept rolling in.
My favorite teams from all over the state just kept winning… and it felt great. It was the perfect weekend to be a football fan in this part of Georgia and, to my recollection, having every team that I follow hit their stride at the same time hasn’t happened in quite a while.
To kick off the action, on Friday night, all the “good guys”; the Southland Academy Raiders, the Americus-Sumter High Panthers, and the Schley County Wildcats each came out on the winning ends of important region match-ups.
The next day, the Georgia Bulldogs made short work of the other Bulldogs (you know, the Bulldogs from the other side of Alabama) and Georgia Tech took down the University of Pittsburgh.
*Sorry Georgia Southern fans, maybe you’ll have a reason to celebrate next week.
On Sunday, on the national stage, the Atlanta Falcons went on to earn their “W” over Detroit.
To add the icing to the proverbial cake, Atlanta United won their Sunday football (soccer) game as well. Heck, even my fantasy football team won this weekend (which is becoming increasingly rare).
All in all, I’d say it was a great weekend for all of my favorite teams.
Let’s take a look at what happened in local gridiron action and what’s coming up next.

By MICHAEL MURRAY
The Schley County Wildcats celebrated Homecoming on Sept. 22, battling to a 36-35 win over the Dooly County Bobcats.
With the win, the Wildcats jumped to 3-1 on the 2017 season. The Schley crew is currently undefeated in Region 4-A competition after two contests.
The ‘Cats dropped into a hole early, falling behind 15-0 in the first quarter. Bent but not broken, the Schley crew steadily clawed their way out of the deficit, tossing 15 points on the board in both the third and fourth frames while holding their guests to only one touchdown in each of these quarters.
The Wildcats took a 30-29 lead into the final stanza, in which each team posted six points to bring the game’s total to 36-35 in favor of the hosts when the buzzer sounded.
The Schley squad put on quite a show for the local fans that evening, amassing 325 rushing yards alongside 44 more through the air for 369 total yards.
Due to their strong passing attack, the Bobcats narrowly edged the Wildcats in all-purpose yardage with 383. 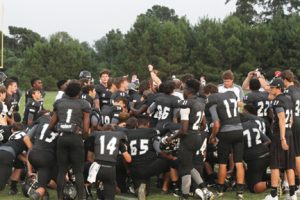 MICHAEL MURRAY I ATR:
Members of the Schley County Wildcats hear from head coach, Darren Alford, in preparation for an early-season match-up in Ellaville.

Schley’s James Baker set the bar high for the Wildcats in the tilt, rushing for 171 yards on 24 carries. Tra Sampson followed closely with 112 yards covered on 20 totes. Calvin Sims added another 29 yards on the ground and Jakim Williamson-Hart tacked on another 11.
Schley quarterback, Garrett Peavey, connected on five passes in the match, with Derric Tatum on the receiving end of the longest, at 19 yards. Zykievious Walker pulled down a pair of passes for 16 yards gained and Sampson caught another pass for eight yards.
Zamon Ross added another 32 yards on a kickoff return.
Schley’s defensive line was on a roll during the match-up, led by Dartavious Napper, who clocked three solo tackles, four assists, and one interception. Baker and Sampson each added three solo tackles and assisted on two in the tilt. Walker took down one opponent on his own while assisting in four others and forcing a fumble. Ja’Myron Clayton gained four solo tackles and Alec Harris assisted on two and soloed a pair. Peyton Register soloed three tackles and assisted on two.
The Wildcats hit the field again on Sept. 26 for a make-up game against the Georgia Military College Bulldogs. The results of this match-up were not available at press time.
The Schley crew will return to action on Oct. 6, hosting the Taylor County Vikings for a Region 4-A contest.
The Americus-Sumter High School (ASHS) Panthers made quite a display on Sept. 22 as well, as the team defeated the Northside High Patriots 21-17 at Finklea-Robinson Field in Americus.
Several Panthers stepped up to the plate to help propel the team to victory in their Region 1-AAAA match-up.
ASHS’ Kobe Lewis took 30 carries for 175 yards in the game and quarterback, Kierston Harvey, connected on 15 of 24 passes for 187 yards and three touchdowns.
ASHS wideout, Braelin Williams, brought down seven passes for 114 yards and a pair of touchdowns while Sage Finch made two catches for one six-pointer.
The Panthers will return to the field on Sept. 29 to take on traditional Region 1-AAAA powerhouse, the Cairo Syrupmakers; the defending Region champions.
By all accounts, it seems that the Syrupmakers’ team is not quite as strong as it was last year. In fact, in Cairo’s region opener against the Hardaway Hawks, all of the team’s points came off the foot of place kicker, Noah Jones, who nailed a trio of field goals to seal the victory.
That certainly doesn’t mean that the Panthers have an easy road ahead of them. The Syrupmakers have been historically known as a team comprised of hard-nosed, stubborn defenders, and this year is no exception.
In order for the Panthers to add keep their region winning streak intact, head coach Erik Soliday and the crew will need to bring the same fury to the field that they have displayed in their past two match-ups. Fortunately, for the team’s supporters, the Panthers have momentum on their side and have shown no signs that they intend to slow down any time soon.
Speaking of momentum, Southland Academy fans are still celebrating the team’s Sept. 22 Homecoming victory over the Tiftarea Panthers. The win marks the Raiders’ seventh straight this season and solidifies the team’s best win tally since 2013, a season in which the Southland crew went 8-3.
With the victory, the Raiders jump to the second-place spot overall in Georgia’s AAA independent competition. At this point in the season, the Raiders have given up only 26 points while putting 305 points on their own half of the scoreboard.
The Raiders will head to Albany on Sept. 29 to take on the Deerfield-Windsor Knights, one of the school’s oldest rivals. The Knights bring a 3-4 record to the contest though, as any football fan knows, the teams’ records before they face off doesn’t really tell a spectator much. It’s the team’s records after the final buzzer that really count and, if the Raiders want to snag their eighth win of the season, they’ll have to bring everything they have to the field in Albany.
Let’s hope next weekend is another one to celebrate!