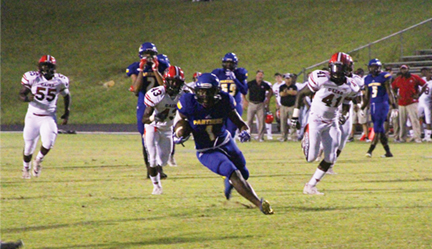 MICHAEL MURRAY I ATR: ASHS’ Kobe Lewis leaves his pursuers in the dust after pulling down a pass and taking off for the goal line during the first quarter of the Panthers’ Sept. 29 home match-up against Cairo.

AMERICUS – The smoke from the grill wasn’t the only thing smoking at Alton Shell stadium on the evening of Sept. 29 as the mighty Americus-Sumter High School (ASHS) Panthers hosted region opponent, the Cairo High School Syrupmakers.
The Panthers jumped ahead early, scoring a pair of touchdowns in the first quarter to give the home team a lead that they would hold onto until the final buzzer, when ASHS took the 31-15 win.
With the victory, the Panthers improve to 4-2 overall on the season. The team’s Region 1-AAAA record jumps to 3-0.
ASHS received the opening kickoff and went right to work as junior quarterback, Keirston Harvey, and senior receiver, Braelin Williams, picked up where they left off last week in the passing game. Two big completions to Williams set the Panthers up with first and goal. ASHS head coach, Erik Soliday, then put the ball in the hands of his big-play running back Kobe Lewis who punched it in for the first touchdown of the game. A blocked PAT made it an early 6-0 lead over the Syrupmakers.
The Panthers’ dominant defense had the Cairo offense’s number as they forced early three and outs, putting the ball back in the hands of the hot Americus-Sumter offense.
When the offense took the field, the Williams show continued as the wideout kept the drive going with a huge third down conversion. A few plays later, Williams ran a crisp slant route followed by an exceptional run after catch cutting back across field for another Panther touchdown, pushing the lead to 12-0.
On the very next drive, Harvey went deep, looking for Lewis on a wheel route out of the back field but the pass was intercepted by a Cairo defender and returned inside the Panthers twenty-yard line. The Syrupmakers punched it in on the very next play off a sweep to the left, cutting the ASHS lead to 12-7. Late in the second quarter, trying to take momentum into the locker room, Harvey launched a prayer into the end zone and Williams was there to answer it with his second touchdown of the night sending Americus Sumter into the second half leading 18-7.
The Panther defense continued to put pressure on the Cairo offense as Mikal Douglas lead the way with a big hit and a fumble recovery. Two costly penalties against the Syrupmakers put ASHS in the red zone and Lewis plunged it in from a few yards out, extending the lead 25-7.
As the fourth quarter approached, the Panthers decided to pound the rock and kill the clock. Three consecutive first down runs from the Panthers’ rushing attack led to another touchdown run by Lewis, making it a 31-7 ball game.
Cairo finally put a solid drive together to cut the lead to 31-15, giving them hope late in the fourth. The Panthers continued to shut them down, but a lost fumble on their own goal line gave the ball back to Cairo and restored their hope. The visitors’ last hope came to an end, however, as the Panther defense withstood a promising Cairo drive, forcing a turnover on downs to end the game.
ASHS will be off next week and will return to action October 13, celebrating Homecoming with a contest against the Shaw High School Raiders.