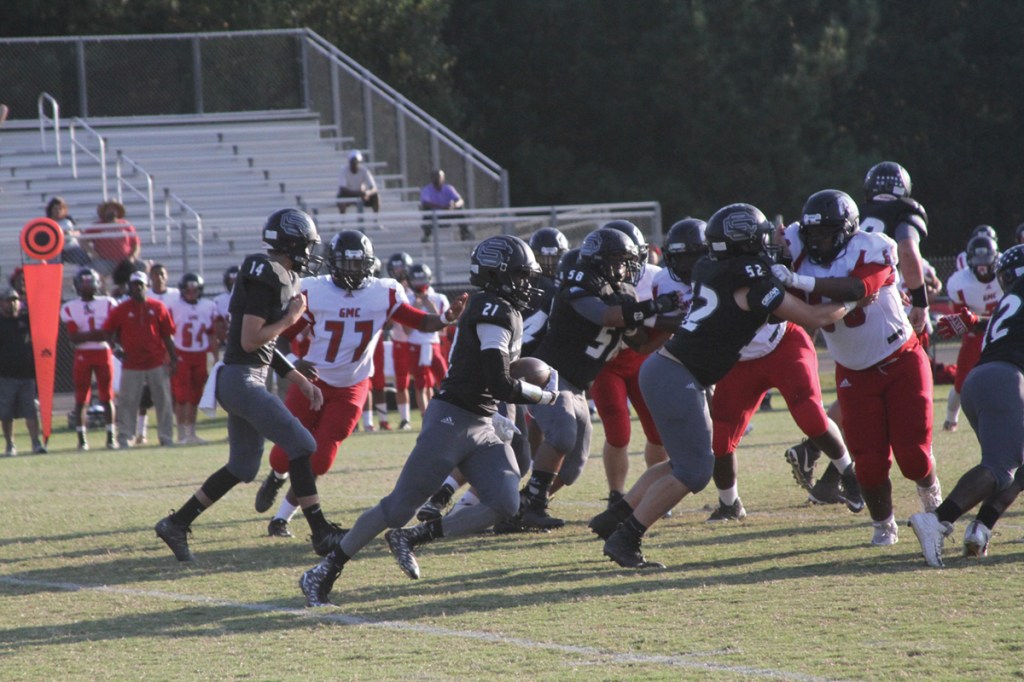 MICHAEL MURRAY I ATR: Schley’s Jakim Williamson-Hart (21) rushes down the field as teammates, Wayde Montgomery (52) and Richie Quiroz (58), keep the GMC defenders at bay during the Wildcats’ Sept. 26 contest against the Bulldogs in Ellaville.

ELLAVILLE – The Schley County Wildcats football team delivered a special mid-week treat to an uncharacteristically slim crowd at their home field in Ellaville on Sept. 26.
The Wildcats took on the Georgia Military College (GMC) Bulldogs in a make-up game and utilized an explosive second half to deal the visitors a 52-0 defeat to the delight of the home fans.
The ‘Cats pulled ahead by a margin of 12-0 in the first half of the non-region match-up and began making waves in the latter half of the tilt, as the team took off to earn the blowout win.
With the victory, the Wildcats jump to 4-1 on the 2017 season while the Bulldogs drop to 3-2. The Schley crew is currently 2-0 in Region 4-A.
The game got off to a relatively slow start, as the Bulldogs held the ‘Cats to three and out on the opening kickoff. The GMC crew then began to slowly make their way down the field on a drive that was slowed by a series of hard stops from Schley’s Zykievious Walker, Zamon Ross, Alec Harris, Trent Bivins, Dartavious Napper, and Jonathan Thornton.
From midfield, the Bulldogs were forced to boot a punt, which Ross returned to the 25.
It was three and out again for the Wildcats, who responded in kind, holding the Bulldogs to only three downs on their return, aided by Will Montgomery and Lorne Barineau, who got in on the tackling action.
The visitors got another shot at it, however, as they jumped on a fumble on the Wildcats’ return.
Once again, the hosts stubbornly refused to give up any ground and forced a punt.
The Wildcats then embarked on a 12-play drive, propelled by a series of runs by Derric Tatum and Tra Sampson. Jakim Williamson-Hart and Harris made progress on the ground as well while Sampson and Ja’Myron Clayton pulled in passes from quarterback, Garrett Peavey, to put the Wildcats within striking distance.
Eventually, the Wildcats found themselves looking at second and goal with mere inches between them and the opening score. Tatum plowed his way through the fray to toss six points on the board for the Wildcats halfway through the second quarter. 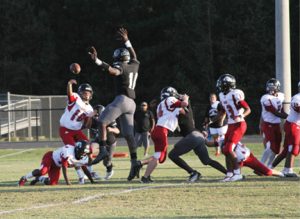 MICHAEL MURRAY I ATR:
Schley’s Zykievious Walker leaps up in an attempt to break up a pass attempt during the Wildcats’ Sept. 26 match-up against the GMC Bulldogs.

The teams traded possession three more times before the score board would see action again.
The Bulldogs threatened late in the second quarter, pushing the ball all the way to the four yard-line. The Wildcats made an impressive goal-line stand, gaining a sack to lessen the pressure and forcing a pair of incompletions, one of which was deflected by Clayton.
From the eight-yard line, the Bulldogs were forced to attempt a field goal. As GMC’s Walker McDade made the kick, Schley’s Napper leapt up to get a hand on the ball and send it out into the open, where the Z. Walker retrieved it.
From their opponents’ 18, the Wildcats utilized runs by Hart and Harris. Jarrett Long, now handling quarterback duties, connected on passes to Clayton, Walker, and Christian Arnett, who dragged several Bulldog defenders all the way to the six-yard line.
From the six, Tatum ran the ball up the gut to give the Wildcats a 12-0 edge that they would hang onto until the halftime buzzer.
Whatever pep talk Schley head coach, Darren Alford, gave the Wildcats during the halftime show seems to have been effective, as the team returned from the locker room with a vengeance.
Over the next 16 minutes of clock time, the Wildcats managed took only 12 snaps to toss 40 more points on the scoreboard. All the while, Schley’s determined defenders were able to keep the Bulldogs out of field goal range.
The ‘Cats’ first score of the second half came with 10:08 to play in the second quarter. The Wildcats ended up with excellent field position when Barineau deflected a punt, leaving the Wildcats with possession at the GMC 35. From there, Long zeroed in on Clayton for the 35-yard touchdown pass, leaving the hosts up 18-0.
After holding the Bulldogs to four downs, the Wildcats struck again at the 8:10 mark, when Ross pushed the ball to the GMC 15 on a 55-yard jaunt. Harris then completed the trip to break the plane and give the hosts a 24-0 edge. William Blackwell then split the uprights to boost the gap to 25-0.
Three minutes later, the Wildcats padded their lead when Trent Davis set up a touchdown play with a 19-yard rush that ended at the GMC 31-yard line. Landon Dailey then went the distance, rushing down the right side for the ‘Cats’ fifth six-pointer of the match. Once again, Blackwell’s kick sailed true, leaving the Wildcats up 32-0 with 5:11 remaining in the third frame.
After the Bulldogs took their four downs, the Wildcats continued to show the visitors what they’re made of when took the punt 15 yards to the Bulldog 43.
Williamson-Hart proceeded to add 16 yards to the ‘Cats’ progress before Long fired off a dart to Ross. On second and four, Long scanned the field to find Davis wide open. Long sent the ball his way and Davis took off for a 36-yard touchdown.
On the return kickoff, a GMC back dropped the ball, giving Dailey the chance to jump on it near the GMC 10 –yard line. A trio of rushes by Ross broke the plane for the ‘Cats and Blackwell, once again tacked on the PAT, leaving the ‘Cats up 45-0 with 1:04 left in the third quarter.
The Wildcats weren’t done, however. The hosts recovered another fumble at their opponents’ 39-yard line, setting up their final scoring drive.
A pair of rushes by Dailey put the game’s final touchdown and Blackwell’s final PAT attempt tacked on one more to give the Wildcats more than enough points to cruise through the final eight minutes of the game.
Long completed seven of eight pass attempts for 129 yards in the match. Peavey added another two completions for an additional 30, bringing the total to 159 yards through the air.
Clayton caught five passes for 89 yards and Davis pulled down one for another 36. Sampson, Walker, and Ross received passes as well.
The Wildcats covered 267 yards on the ground, with Dailey accounting for 70 and Ross close behind with 65. Tatum and Williamson-Hart each tacked on 35 and Harris covered an additional 29.
Napper led the team’s defense with three solo tackles and four assists. James Baker and Sampson both soloed three and assisted on two. Walker, Clayton, Harris, Peyton Register, Tatum, Wade Rogers, Bivins, and Montgomery each contributed multiple tackles to the victory as well.
The Wildcats earned 21 first downs in the match while holding the visitors to only seven. The Bulldogs covered 180 total yards in the tilt.
The Wildcats will return to action on Oct 6, putting their region record on the line as they host the Taylor County Vikings.