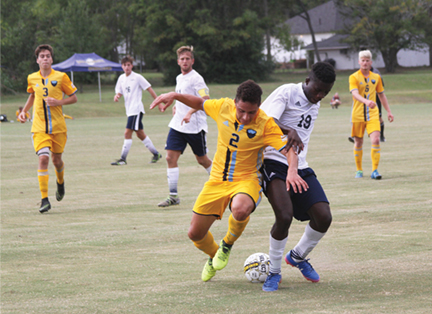 MICHAEL MURRAY I ATR: GSW freshman, Divin Moke, competes with a Point University opponent for control of the ball during the second half of the Hurricanes’ Oct. 4 match-up in Americus.

AMERICUS — Georgia Southwestern State University (GSW) junior, Chris Avery, saved just enough energy to turn on his jets one final time and burst through the Point University back line to clear the way for his game-winning assist to sophomore Dylan Marshall in a 2-1 overtime victory on Sept. 4 at Hurricane Field. Marshall took the rolling pass from Avery inside the right post and punched it across to the far corner of the net for his fourth goal of the season.
GSW snapped a five-match losing streak to improve to 4-5-1 overall while Point dropped its fourth consecutive match to fall to 6-5-1. With the win, the Hurricanes matched their highest victory total in a season since joining the NCAA in 2006.
GSW struck first in the game, executing a corner kick to perfection when junior, Shane Madray, fed the ball out to senior, Daniel Mendsen, along the right sideline and Mendsen delivered a soft lob pass in front of the goal that freshman, Divin Moke, went up top and headed past Point’s diving keeper. It was Moke’s third goal of the season.
The Hurricanes led 1-0 at the halftime break, but Juan Domingo provided the equalizer for Point in the 59th minute when he tapped in a rebound directly in front of the goal.
Avery and Marshall hooked up for the game-winning score in the 98th minute.
Senior keeper, Joshua Swift, saved three shots down the stretch for GSW to help force overtime. He finished with seven for the day. Jacob Price stopped five for Point.
The Skyhawks outshot GSW, 17-14, but committed three more fouls (11-8) and the Hurricanes held a 10-2 advantage in corner kicks.
Up next, the Hurricanes have the weekend off and return to the pitch on Oct. 11, when they visit Clayton State University for a 1:00 p.m. Peach Belt Conference match.