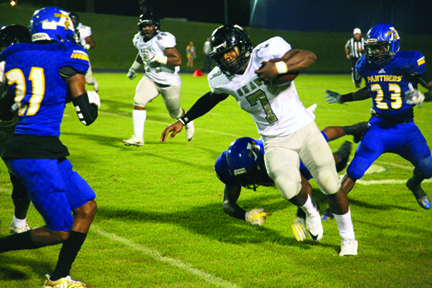 PHOTO BY CARLA CLADD: ASHS’ Jaquan Searcy (21) and Mikal Douglas (23) close in on a Shaw running back during the Panthers’ Oct. 13 Region 1-AAAA contest against the Raiders in Americus.

AMERICUS – “Fright Night don’t let the Panthers bite” was the slogan for homecoming on the evening of Oct. 30 at Finklea-Robinson field as the Americus-Sumter High School (ASHS) Panthers hosted the Shaw Raiders. The Panthers gave the crowd of their fans plenty of reasons to celebrate as they defeated the Raiders 31-0 in the Region 1-AAAA match-up.
With the victory, the Panthers jump to 5-2 overall on the season and remain undefeated in region competition after four games.
The Panthers took a big bite out of the Raiders early in the first quarter after recovering a muffed punt after going three and out on offense. After snagging the punt ASHS senior running back, Kobe Lewis, took things into his own hands on the ground, breaking multiple tackles and finding the end zone to put the Panthers up 7-0.
ASHS’ defense has been rock solid all season at home and nothing changed Friday night as Mikal Douglas led the way with big hit after big hit, eventually forcing the Shaw offense to cough up the football inside their own twenty-yard line. ASHS’ Malcolm Mercer recovered the fumble.
The Panther’s ground game continued to pound the rock with Lewis as he burst through the right side of the Shaw defense for a short run to score his second touchdown of the night, extending the Panther lead to 14-0.
Late in the second quarter, Shaw began to gain a little momentum on the ground, rushing for back to back first downs and moving into Panther territory. A quick slant aided by an unsportsmanlike conduct call against Americus-Sumter pushed the Raiders into a first and goal situation for the first time of the game. A holding call forced the visitors back to the sixteen-yard line, however.
Trying to catch the Panther defense sleeping, Shaw attempted to passes to the left side of the field, but ASHS’ Jakhari White did what he does best; defend the pass with two break-ups nearly snagging his seventh interception of the year.
The Panthers’ defense stood tall and forced a turnover on downs to end the Shaw drive and go into the half leading 14-0.
After halftime, the Panthers’ rushing attack picked up where they left off in the first half. A big run by Lewis loosened up the defense and opened up the passing game for quarterback, Keirston Harvey, as he found AJ Payne for a big first down connection through the air. A few plays later, Braelin Williams found the opening in the zone off a slant route and, once Harvey threw the ball, Williams did the rest to push the lead to 21-0.
On the other side of the field, back to back sacks by Mercer and Tyler Tyson kept the pressure on the Shaw offense’s neck the entire game. Late in the third quarter, the Harvey to Williams duo continued to put on a show for the homecoming crowd as Williams ran a crisp corner route only to break one tackle and sprint down the sideline for his second receiving touchdown of the night, giving the Panthers the 28-0 lead.
ASHS head coach, Erik Soliday soon put in the second team to finish off the night and give reps to the younger guys as the Panthers walked away easily with the homecoming victory with the final score of 31-0. The Panthers will be on the road next Thursday for another region showdown against the Hardaway Hawks.