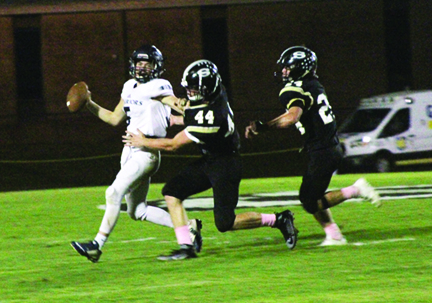 MICHAEL MURRAY I ATR: Southland’s Morgan Youngdale (44) and Clay Owens (24) team up to sack the Brookwood quarterback during the first half of the Raiders’ Oct 13 tilt against the Warriors.

AMERICUS – The Southland Academy Raiders wrapped up their regular gridiron season in style on Oct. 13, dealing a 41-3 defeat to the Brookwood Warriors.
With their 9-1 overall record in 2017, the Raiders have secured themselves a spot in the Georgia Independent School Association playoffs, scheduled to begin on Oct. 27. The teams’ standings for the playoffs had yet to be determines as of press time, though a representative of the Southland team stated that the Raiders are expected to be in the top three.
By this point in the season, Southland fans have grown accustomed to their favorite team grabbing a lead early in a game and continuing to build momentum throughout the first half.
The Raiders certainly didn’t disappoint as they squared off against the Warriors.
Brookwood received the initial kickoff and steadily pushed their way down the field, slowed by the efforts of Southland defenders, Sam Copland, Parker Weldon, Hunter McCain, Chandler Studdard, and Brody Shattles, who each contributed tackles to the Raider cause.
With an opening drive spanning 11 plays, the Warriors hit the board first after a long reception by (BW 6) landed the visitors deep in the Raiders’ red zone.
Hard stops by Morgan Youngdale and Stephen Barnes left Brookwood looking at fourth and goal from the five at which point the visitors opted to kick a field goal. The kick sailed true, giving the Warriors an early 3-0 lead three and a half minutes into the first quarter.
The Raiders struck back with a vengeance on their return, with Townsend Ray getting the ball rolling by returning the kickoff to the Southland 39. 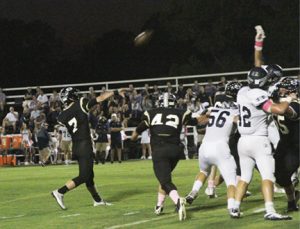 MICHAEL MURRAY I ATR:
Southland’s Alex Roach fires off a pass to Saige Batten during the Raiders’ Oct. 13 match-up against Brookwood in Americus.

A set of rushes by Ray and Clay Owens then pushed the ball into Brookwood territory.
From the visitors’ 34, Southland quarterback, Alex Roach, connected with Luke Law to put the Raiders within striking distance. From the 21 yard-line, Roach found Southland’s Saige Batten in the end zone to put the Raiders ahead, where they would stay through the remainder of the first half.
A fake kick attempt on the PAT was halted by the Warriors, leaving the Raiders up 6-3 with six minutes remaining in the first stanza.
The Raiders held Broookwood to four downs on their answering drive, eventually forcing the visitors to punt to the Southland 37.
On the first play of the Raiders’ possession, Brookwood recovered a fumble and made three plays of their own, but Southland had other plans.
As the Warriors continued to press further, Law intercepted a pass intended for a receiver in the end zone, which he returned to the 25.
From there, Owens made a pair of runs to bring the ball to midfield and Logan Morris added another 25 yards to put the pressure on the visitors. A rush from Shattles set up another hand off play that, once again, saw the Raiders break the plane and add to their advantage. Owens ran the ball in for a 24-yard six-pointer.
Southland placer Kicker, Zane Hines, then split the uprights to give the Raiders a 13-3 edge 10 minutes into the first frame.
Southland, once again, found themselves in great field position on Brookwood’s return when, four plays into the return drive, a high snap and a pass that was broken up by Copland set the visitors back all the way to their own nine-yard line.
A stubborn Brookwood defense would prevent the Raiders from adding to their tally, however, and the Raiders were held to three and out.
The Raiders responded in kind, holding the Warriors to only four downs to retake possession on the Brookwood 39.
Owens, once again, opened the action with a short rush, followed by a pair from Morris.
On fourth and one, from the 30, Roach handed the ball off to Owens, who took off down the left side for his second touchdown rush of the game.
Hines’ kick, once again, sailed true, putting the Raiders up 20-3 with six minutes left before the half.
The Warriors threatened twice more before the halftime break, but a sack shared by Youngdale and Owens halted one drive. In the final moments of the first half, Brookwood’s Adam Davis pulled down a long bomb and scrambled to the Raider red zone. Time was not on the visitors’ side, however, and the Warriors took a 17-point deficit into the locker room at half time.
The teams traded possession six times in the beginning of the third quarter, which was highlighted by an on-side kick that the Warriors recovered, a long interception by Weldon, and an apparent 79-yard touchdown by Owens that was called back due to a penalty.
Owens would again see the opportunity to score at the 2:35 mark of the third frame after he followed a sack shared by McCain and Youngdale, with one of his own to put the Raiders in great field position, at the Brookwood 20.
From there, Owens took the ball and navigated his way through a series of Warrior defenders, seemingly not even getting touched along the way, for a 20-yard touchdown rush. Hines, once again, nailed the PAT, leaving the Raiders ahead 37-3.
Early in the fourth, Southland hit the board when a long pass to Batten brought the ball to Brookwood’s one yard-line, allowing Roach to barrel his way up the gut for another six-pointer.
To top it off, the Raiders struck once more with 2:30 left in the game when Owens showed off his speed one last time, rushing for a 51-yard touchdown. Hines was spot on in his final two kicks of the night, securing the 41-3 win for the Raiders.
The Raiders gave up only 16 yards to the Warriors on the ground, while amassing 354 rushing yards of their own. Brookwood won the battle through the air, collecting 223 passing yards while Southland gathered 37.
Roach connected on four of eight passes, with Batten on the receiving end of two for 27 yards.
Owens set the bar high for the team on the ground, rushing 16 times for 175 yards, followed by Ray, who racked up 75 yards on six totes. Morris added another 41 yards to the tally on four carries and Batten contributed 39 on a single rush.