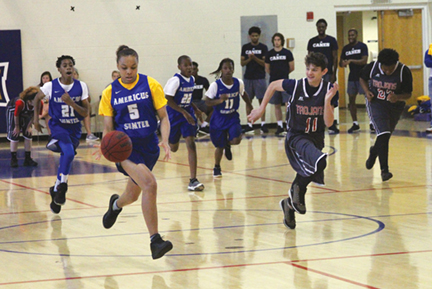 MICHAEL MURRAY I ATR: Special Olympians from Sumter County square off against athletes from Lee County as members of the Hurricanes basketball team cheer them on from the sidelines on Oct. 13 in Americus.

AMERICUS – The Area 11 Special Olympic Games were held on Oct. 13 at Georgia Southwestern State University (GSW) in Americus.
For the event, over 200 student-athletes from six counties converged on the Storm Dome on GSW campus to participate in competitions designed to showcase basketball skills, including shooting, passing, and dribbling.
The athletes brought a wide array of talents to the court at GSW as they honed their skills in individual contests and team competitions.
One of the event’s principal organizers, Gia Sandwich, special programs coordinator for the Sumter County School System, spoke with the Times-Recorder at the event.
“We’re very excited to be here,” she said. “We do fall games and spring games. The college helps out, taking over for the fall games with the basketball skills… They also help out with the spring games.”
Sandwich went on to say that the event takes months of planning to execute.
“I started working on the shirts and all of the paperwork for all of the teachers this summer …,” she said. “I have to plan ahead to do special Olympics because it’s just me that does all of the paperwork and all that.”
Sandwich went on to say that she was very excited to be there at the games. “This is what I’ve worked hard for all summer,” she said. “The kids really enjoy it. It’s all for the kids.”
Carl Willis, the adaptive physical education instructor for the Sumter County School System spoke with the Times-Recorder as well, saying that around 150 athletes from the system were taking part in the games alongside participants from Dooley, Crisp, Lee, Taylor, and Worth Counties.
“We’ve got a good number of volunteers, probably over 100, which is great for GSW and, of course, for our school system.” He added. “It’s been a good day.” 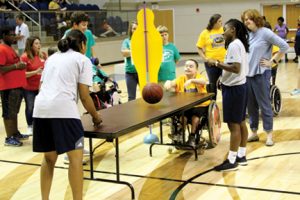 MICHAEL MURRAY I ATR:
A Special Olympian from Sumter County works on his passing skills as volunteers from Georgia Southwestern and the Sumter County School System offer assistance and encouragement.

Willis added that the program would not be successful without the tireless efforts of countless volunteers and community members and that he wished to express his thanks to everyone who participated.
Gavin Bernstein, a special education professor at GSW, discussed the college’s participation in the games with the ATR.
“This is the year that we’ve had the most counties participate…,” Bernstein said. “We’re trying to expand the area to include more athletes.”
“It all comes together with the premise of ‘We’re trying to get the students more involved with athletic events and those leisure skills that they need in life’”, he continued. “As far as the planning goes, we have a class that helps to work on that. It’s really all about getting the campus involved in it. They’re the ones that make it happen… Everyone participates.”
“A lot of Greek organizations volunteer to come and help,” he added. “The community supports the games as well. There have been private organizations and private citizens that have come out to help support and volunteer; walk students, cheer them on, and help them through the events. A lot of community volunteers and student volunteers help out in the Olympic Village, where [the athletes] are not competing for ribbons; they’re just having fun. The School of Education helps out. We have other student organizations here as well that have come and volunteered to help.”
GSW athletic director, Mike Leeder, also spoke with the Times-Recorder about the athletic department’s involvement in the games. 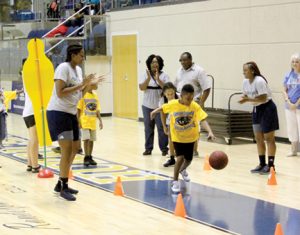 MICHAEL MURRAY I ATR:
A young Special Olympian from Sumter County shows off his dribbling skills as he is cheered on by members of the Lady Hurricanes basketball team on Oct. 13 in Americus.

Leeder stated that members of each GSW athletic team were present for the event, doing everything from running the concession stand, officiating the team games, working with the individuals, or just cheering the kids on. “We try to get just about all of them involved,” he said. “We do just about all we can to include everybody in the department.”
“We work in conjunction with the School of Education here on campus,” Leeder added. “We just try to provide a great experience for the Special Olympians… We’ve been doing this now for 13 years. I think that each year we do a little bit better. We’re excited. It helps us in the fall because we’re using the two basketball venues. It helps because we’re able to get our two basketball teams out there to help coordinate the team games and the individual games as well. It’s been something that we’ve really enjoyed doing. I think our student athletes do a great job immersing themselves in the community. It’s gotten better every year. We’re certainly proud to be a part of it… We’re proud of our relationship with the Special Olympics and the way that the whole campus gets involved in this. It’s a great day for the Special Olympians and we’re just happy to be able to help out.”