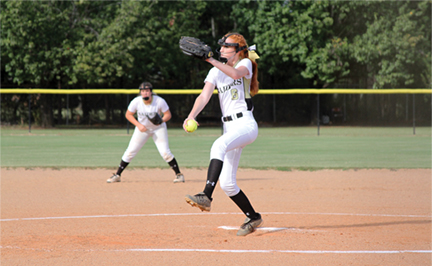 MICHAEL MURRAY I ATR: Southland’s Britney Tyler turns up the heat against a Tiftarea batter during a late-season match-up in Americus.

BELLVILLE, Ga. – After wrapping up their regular season with a respectable 10-10 overall record on the 2017 season, the Southland Academy Lady Raiders softball team hit the road for Belleville, Ga. on Oct. 10 to take part in the first round of the Georgia Independent School Association (GISA) Class AAA playoffs.
In the best two of three series, the number-four seeded Southland ladies were slated to take on the number-one-ranked Pinewood Christian Academy Lady Patriots.
Despite a strong effort from the Southland crew, the Lady Raiders were unable to secure an upset over the Lady Patriots, who have won the GISA Class AAA title for the past three years and, according to Lady Raider head coach, Rusty Tondee, stand a good chance of extending their streak this year.
With the pair of wins, the Lady Patriots improved their overall mark to 18-1 on the season.
The Lady Raiders dropped a 3-1 decision in game one of the afternoon before a rain delay set the tournament schedule back for nearly three hours. Upon returning to the field, the teams clashed for four and a half innings before a lightning delay set the game back another hour and a half. After playing well into the night, the Lady Patriots eventually dealt the Lady Raiders a 12-0 blow to draw the curtain on Southland’s season with a 10-12 record.
Tondee recently sat down with the Times-Recorder to discuss the Lady Raiders’ post-season action.
He began by saying that he was very proud of the way that the Lady Raiders’ young players handled themselves despite being outgunned by an experienced Pinewood roster that lost only three players to graduation last season. 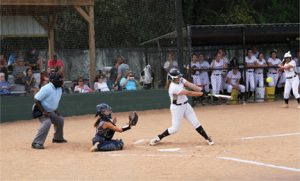 MICHAEL MURRAY I ATR:
Southland’s Holly McCain connects with a pitch during a late season match-up against Tiftarea in Americus.

He also praised Pinewood pitcher, Regan Waters, whom, he said, “will likely be playing for a good college team next year.”
“We just couldn’t get our bats going. We couldn’t get a hit off of her… She did a fantastic job,” he added.
“We played 13 innings of good softball,” he said before turning his attention to the final inning of the second game of the day.
“Things just kind of came unraveled late in the game,” Tondee said, explaining that the Lady Raiders had held the Lady Patriots to only four runs up until the seventh inning, in which Pinewood broke away to toss another eight marks on the board and earn the right to advance to the next round.
“The whole day was kind of crazy anyway. We got through with the first game in about an hour and twenty minutes… Five minutes after the game, we had a flood hit… It took three hours to get the field prepared for the next game. We were pretty determined that we were going to play and not have to come home and go back another day.”
In game one of the series, Reese Roland scored the Lady Raider’s sole run of the match. In the third inning, Roland led off with a walk and Savanna Swann followed up with a walk of her own. Holly McCain then belted a single to right field to complete Roland’s round trip.
Brittney Tyler spent seven innings in the pitcher’s circle, walking only one batter and giving up eight hits. “She did a fantastic job on the mound,” Tondee said.
The Lady Raiders ended up with two hits in game one, scattered by Swann and McCain.
Of Pinewood’s four runs in the match, three were unearned.
In game two of the afternoon, the Lady Patriots opened the scoring with one run in the first inning and crossed the plate three more times in the fourth. Two of their four runs were unearned.
In the seventh, the Pinewood squad really got their bats going to earn the 12-0 shutout over the Lady Raiders.
The other teams from Southland’s Region 3-IAAA participating in the post-season action were Valwood (region champions), Brookwood, and Tiftarea.
The Valwood Lady Valiants were the only team from the region to win the first round of the playoffs and earn the right to advance.
Tondee also assured the Times-Recorder that the future looks bright for the Lady Raiders despite the fact that the team will be losing three key players this year.
Swann, Tyler, and Olivia Perry are expected to graduate in 2018.
“[This year], we could put anywhere between four to six freshmen on the starting lineup on any given day, so we’re really encouraged about next year,” he said.
“We’ve had a lot of young girls get playing time this year and we’re excited about that,” he continued, adding that he had been pleased with the young team’s performance all season, especially the way that the players handled themselves in the playoff games.
The team will certainly feel the absence of their most experienced players, however. “We have three really great seniors on the team this year,” Tondee concluded. “We’re going to miss them a lot. They’ve done a lot for this team and they’ve played very hard for this program. You don’t lose three seniors like that and not miss them the following year.”