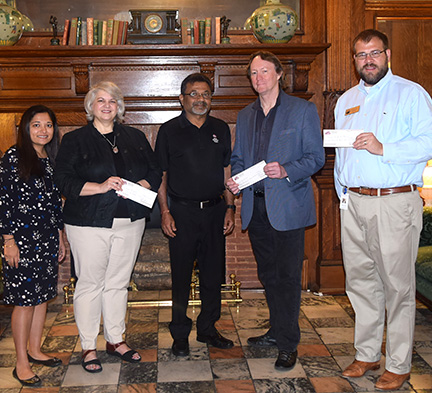 AMERICUS — The Sharad Patel family, owners of the historic Best Western Windsor Hotel, raised $7,400 while celebrating the grand hotel’s 125th anniversary. A check presentation was held recently.
The event welcomed  guests from Americus as well as around the Southeast attend the gala.
Sharad Patel gave a speech thanking those who had saved the Windsor and have helped support the Windsor throughout all these years.
Everyone was dressed elegantly in the period of the 1890s-1920s.
The cuisine was put together by Cousins Catering, which sponsored the event, as well as the hotel’s Rosemary & Thyme culinary team. It was inspired from a recipe book found from the Titanic.
A harpist, Burreal Jones, performed, as well as talented students who sang cabarets, put on skits, and dressed as former guests throughout the evening. The Music Department at Georgia Southwestern State University performed songs from the period in the restaurant.
Divya Patel, a family member and marketing director for the hotel, said that one couple made the 125th Gala their first outing since the wife has beaten cancer.
Another couple, from Florida, had just regained power the night before and wanted to make it to the event. The husband finds unique Best Westerns to travel to, and that’s how he found the Windsor Hotel. He enjoyed the event so much, he actually donated an additional $500.
The $7,400 was divided between Downtown Americus Main Street to use to beautify downtown ($5,700), Jeff Green’s GSW Dramatic Arts Department ($1,200), and Julie Megginson’s GSW Music Department ($500).