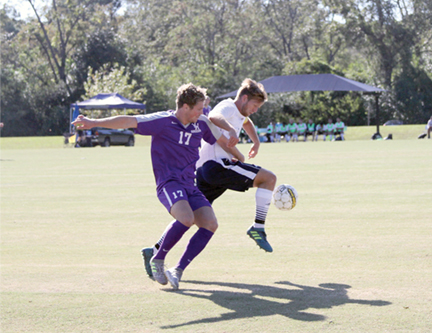 MICHAEL MURRAY I ATR: GSW’s Silvio Polly competes with a member of the Young Harris team on Oct. 25 in Americus. Polly fiished the 2017 season as GSW’s all-time highest scoring player.

AMERICUS – The first half went almost perfectly for the Georgia Southwestern State University (GSW) men’s soccer team on the afternoon of Oct. 25 against Young Harris College at Hurricane Field in Americus… Almost.
GSW played the 12th-ranked team in NCAA Division II even for 40 minutes and 36 seconds. At that point, a momentary breakdown in the Hurricanes defense provided the opening Young Harris needed to capitalize and Mikie Rowe delivered what would turn out to be the game winner, his eighth goal of season. GSW’s defense held off the Mountain Lions’ attack the rest of the way, but that one lapse proved to be the difference as Young Harris defeated the Hurricanes, 1-0.
The Hurricanes wrapped up their season on Oct. 28 by facing their second nationally-ranked NCAA Division II opponent in four days. Number 17-ranked Lander University defeated GSW, 3-0, in front of a crowd of 194 at Hurricane Field.
On Oct. 25, GSW suffered its fifth loss by a one goal differential this fall as their record dipped to 5-9-1 overall and 1-5-0 in Peach Belt Conference (PBC) play, while Young Harris recorded its fifth shutout this season to improve to 11-2-2, 5-1-1 in the PBC.
Rowe took a flick pass from Seba Andreassen on the left side of the field, brought it to the top of the 18-yard box where he rolled a shot past GSW keeper Joshua Swift inside the lower left corner of the goal.
While the GSW defense did its best to hold off the Young Harris attack, offense proved hard to come by for the Hurricanes. Silvio Polly (3) and Jonathan Sayers (2) accounted for all of GSW’s shot attempts in the match.
Young Harris finished with a 19-5 advantage in shots, but only five of the Mountain Lions’ 19 attempts were on goal. GSW had three of their five on goal. The Hurricanes committed nine more fouls (18-9) and were blanked on corner kicks, 14-0.
In their final game of the season, GSW closed out its 2017 campaign with a record of 5-10-1 overall and 1-6-0 in PBC play, while Lander recorded its sixth shutout this fall to improve to 11-3-1, 5-0-1 in the PBC. With the win, the Bearcats claimed the 2017 PBC regular season championship.
For GSW, it was a record-breaking year as five wins are the most in a season over the program’s 12 years in the NCAA and Polly exits as the all-time leading scorer in program history with 23 career goals and 56 points. 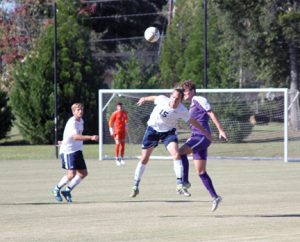 MICHAEL MURRAY I ATR:
GSW’s Chris Steinnwachs recovers feom a header during the Hurricanes’ Oct. 25 tilt against Young Harris in Americus. Steinwachs was among the seniors honored in the season closer.

Lander took the lead Saturday with a goal in the 22nd minute by Sam Lofts, his seventh of the year. GSW trailed 1-0 at the halftime break, but an own goal in the 59th minute put the Hurricanes down by two scores and gave Lander some breathing room. The Bearcats added a late goal to cap off the regular-season finale.
Swift made six saves in the battle. Aleksander Holboe stopped two for Lander.
Lander finished with a modest 12-8 advantage in shots. GSW had three of their eight on goal. Corner kicks were even at 5-5. The Hurricanes doubled up Lander on fouls, 12-6.
GSW recognized its seven seniors (Swift, Polly, Chris Steinwachs, Daniel Mendsen, Trevor Dempsey, Lucas Kimmel and Uriel Rodriguez) in a pre-match ceremony.