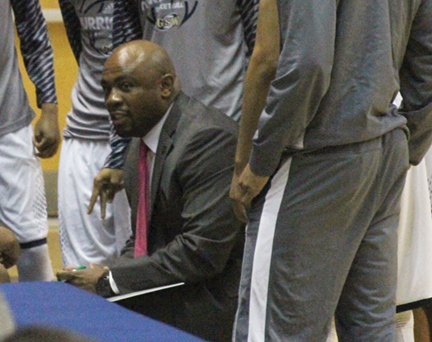 MICHAEL MURRAY I ATR: GSW head men’s basketball coach, Ben Hicks, addresses the Hurricanes during a break in the action at an early 2017 match-up in the Storm Dome in Americus.

AMERICUS – The Georgia Southwestern State University (GSW) men’s basketball team has been picked to finish 12th in the Peach Belt Conference in a poll of league coaches.
GSW totaled 20 points, 12 behind Francis Marion University and Lander University who tied for 10th in voting.
The University of North Carolina at Pembroke is the favorite to win the conference as the Braves received eight of a possible 11 first-place votes to finish with 117 points, seven ahead of second-place Augusta University. Columbus State University was third with 99 points, followed by USC Aiken and Clayton State University in fourth and fifth, respectively. North Georgia was voted sixth, Georgia College seventh, Young Harris eighth and Flagler ninth.
10 newcomers join three letterwinners for the Hurricanes this season after finishing 7-19 overall (5-14 PBC) in 2016-17. Guard Devin Watson leads the returners after starting 20 games and appearing in 26 as a freshman last season. Watson averaged 8.5 points and 3.7 rebounds per game while shooting 44 percent from the field and 83 percent from the free throw line.
Among the newcomers expected to make an impact for GSW this season are guard Quenten Taylor who averaged 10.8 points, 7.0 assists and 4.5 rebounds at Itawamba Community College in 2016-17. Guard R.J. Sessions averaged 9.3 points and 2.1 rebounds a game at Columbus State as a freshman in 2013-14. Forward Andre Statam transferred from Jacksonville State where he averaged 3.4 points and 2.1 rebounds per game as a sophomore last season. Forward Hassan Buggs joins the Hurricanes after playing in four games at Mississippi Valley State in 2016-17 where he averaged 2.0 points and 3.0 rebounds, including scoring four points and grabbing five rebounds against West Virginia.
GSW tips off their season Nov. 1 in an exhibition game at Troy University. The Hurricanes home opener will be Nov. 21 vs. Fort Valley State.