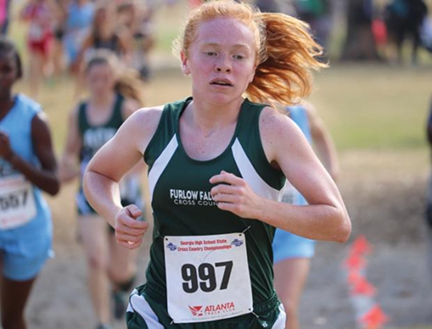 Furlow Charter School’s (FCS) Maya Wynn was the big winner in the girls’ division at the Georgia High School Association (GHSA) Class A Public Area 1 cross country meet, hosted by FCS on Oct. 24.
With her significant win at the area meet, Wynn earned the right to advance to the state meet, in which she won third place with a time of 22:24.17.
Schley County’s boys team also excelled at the state cross country meet.
The Schley County boys team of Austin Anthony, Aaron Pinckard, Tucker Welch, Peter Horton, David Williams, Ricky White, and Luis Williams competed at the State Cross Country meet in Carrollton on Nov. 4.  The team completed their season by placing eighth in the state.
Anthony and Pinckard finished 19th and 21st to lead the Wildcats.
FCS also had seven participants in the boys’ division of the area meet, with Jesse Salazar leading the way for the Furlow Falcons.
Wynn won first-place honors at the GHSA Class A Public Area 1 meet, besting 45 other competitors. Wynn completed the race in 20:39.64 to earn the top award, defeating the second-place competitor, Macy Williams, of Seminole County, by six seconds.
FCS’ Miranda Green took 16th place at the event with a time of 26:05.74 and Tensley Hall crossed the finish line one minute later to earn 25th place.
FCS’ Adrianna Daniel and Rebecca White also competed for the Furlow Falcons.
Ten teams competed in the girls’ division of the meet, with Seminole County earning the top spot in the team category. 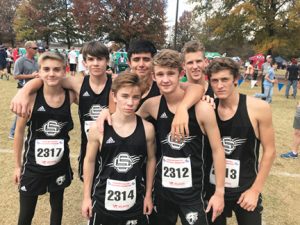 Schley County’s Skyler Julian earned 13th place at the area meet with a time of 25:03.77, followed by Kaitlyn Mooney who completed the race one and a half minutes later for a 19th place finish.
Schley’s Lily Bacon and Iliana Yanez also competed for the Lady Wildcats.
In the boys’ category, Salazar took 18th place for FCS out of 73 competitors with a time of 20:.3.60, followed by Zachary Pickle, who wrapped up the course 30 seconds later for a 29th-place finish.
Todd Davis, Morgan Dent, Caleb Farrow, David Lane, and Brandon Singley also competed for FCS.
Schley County’s boy’s team earned a second-place finish at the area meet, slightly trailing the Baconton Charter team, which won first place.
Anthony set the pace for the Wildcats, crossing the finish line in 18:12.90 to earn a second-place prize. Pinckard completed the course 10 seconds later for third place and Horton earned 11th-place honors with a time of 19:11.40. Welch brought home 15th-place honors with a time of 19:35.10.
The Wildcats will be losing only one senior, Anthony to graduation this year.
In a statement to the Times-Recorder, Wildcat head cross country coach, Gabe Theiss, stated, “Austin will be greatly missed for his leadership and ability but we have a young team that will strive to be back at the state meet again next year.”