Beth Alston: School lunch — what’s not to like about it? 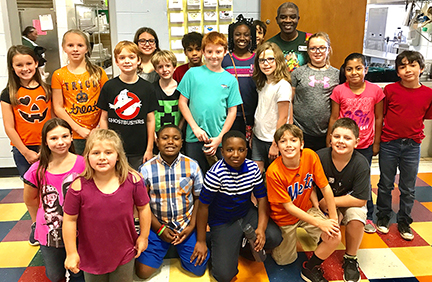 I was one of those unusual children: I liked school lunches! I can’t really say why. Maybe it was because it was different from what my mother or grandmother served at mealtimes. Make no mistake; they were both great cooks. Maybe it was the camaraderie.
There were times in third grade when they served this meat-like substance. I liked it and no one else would touch it. The only thing I can remember disliking about school lunch, from first-third grades, was hominy. I still won’t touch it and can’t even bear to smell it cooking.
In fourth through sixth grades, my brother Ronnie and I had it made. Our first cousin’s “other” grandmother was in charge of the lunchroom so we got an extra homemade cookie or yeast roll from time to time, and always a sweet smile and a hug.
Even in seventh and eighth grades, I had no complaints about the school food. It was pedestrian at best but the burgers were really good. I bagged my lunch in high school.
It’s always a pleasure to be invited to one of the local public schools for a meal. I’ve been lucky to have enjoyed Thanksgiving and Christmas meals lots of times with them, and believe me, those women know how to cook! My longtime friend Larry Jackson, who is an award-winning school nutrition director, now at Furlow Charter School, invited me during National School Lunch Week in October. I sat with Bill and Charlene McGowan in those tiny seats at the table with some first graders. We enjoyed our healthy but delicious meal of baked spaghetti, a whole grain bread stick, sweet potatoes, whole-kernal corn and peaches.
Bill McGowan introduced to a tiny little pixie of a first-grade girl who had not touched her food. I asked her why and she had no answer, just a cute smile. I believe she was enjoying the social aspects of the meal more than the nutritional fuel.
I talked to several other students, called “scholars” at Furlow, and asked for their opinions on the school’s food offerings.
Medley Walker, 10, fifth grade: “It was good because it was warm. I love the interesting food.”
Ansley Butler, 9, fourth grade: “It’s good.”
Riley Thompson, 9, fourth grade: “I like everything they cook and I love the flavors.”
Aaron West, 10, fourth grade: “It’s good. I like the things they serve. It’s good to have a choice. It’s good to eat and it doesn’t make us sick.”
Kennedy Wilson, 10, fifth grade: “It’s really good; the spaghetti is fantastic.”
Paris Garcia: 10, fifth grade: “It’s good. I like how they cook it.”
Brooke Smith, 10, fifth grade: “Sometimes it’s very good. Sometimes they’re crafty with the school lunches. It’s in a sack: sandwiches, chips, fruit. I like the pizza because it’s done but not overcooked, but just right.”
Natalya Larkin, 9, fourth grade: “It’s good. Some of it can be healthy.”
Collin Richardson, 9, fourth grade: “It’s good. The spaghetti is my favorite.”
Sumter County Schools received the Golden Radish Award this year for Furlow Charter School’s farm to school accomplishments. This is like winning an Oscar in the film industry.
The press release states, “Sumter County Schools was recognized at the Platinum level for their accomplishments during the 2016-17 school year, including:

•    Furlow Charter School scholars took an integral role in planning the school gardens. Scholars spent several weeks researching the types of crops appropriate for the region before preparing the soil and planting in their assigned grade level raised beds. The garden was integrated in all aspects of the curriculum resulting in increased student interest in agriculture, the weather, and trying new fruits and vegetables.
•    Local community organizations and businesses support the district’s farm to school efforts throughout the year. County Extension Agents assisted scholars in soil testing and weed control, local businesses donated seeds and gardening supplies, and the local Chamber of Commerce supported various activities.
•    Scholars in Grades K-10 shucked fresh corn for school lunches during Feed My School for a Week.”
That is an awesome accomplishment and we congratulate them!
The release also had some interesting stats about the farm to school program.
The 2016-17 school year was a record breaking year of farm to school growth in Georgia. The Golden Radish school districts collectively:
●        Served over 97 million meals that featured locally grown and raised foods
●        Conducted 8,204 taste tests
●        Taught 7,263 standards based lessons
●        Tended 885 school gardens
●        Engaged students in 3,794 hands on cooking activities
●        Involved parents and community members in 1,339 farm to school activities”

So I ask again, what’s not to like about school lunch? Well, I don’t know about other school systems, but I say we’re blessed here in Sumter County to have such conscientious leadership in the area of school nutrition, and I will always enjoy dining with them!

Beth Alston is editor and publisher, Americus Times-Recorder. Contact her at 229-924-2751, ext. 1004 or beth.alston@americustimesrecorder.com