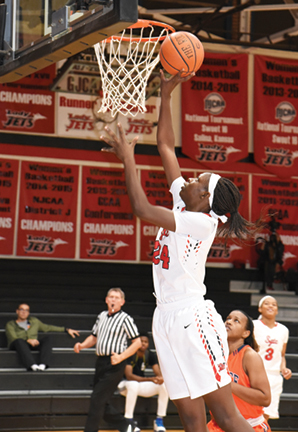 AMERICUS – The South Georgia Technical College (SGTC) Lady Jets walked away with two big wins in the Lady Jets Thanksgiving Classic basketball tournament held recently in the Hangar on the SGTCAmericus campus. The Lady Jets defeated Motlow State in their opening match-up, 73-52 and then came back and secured a 78-68 win over Wallace State in the second game to dominate the tournament.
The Lady Jets are now 8-1 overall and still 3-0 in the Georgia Collegiate Athletic Association conference.
Central Georgia Tech and Wallace State finished the tournament with 1-1 records while Motlow State dropped to 0-2 in the tournament. Wallace State defeated Central Georgia Tech, 59-47 in the opening match-up, and Central Georgia Tech came away with a narrow 68-64 win over Motlow State during the second day of the tournament.
Freshman guard Aubrey Maulden from St. Simons, led the Lady Jets to the 73-52 win over the Motlow State Lady Bucks. Maulden had a total of 23 points and was five of 11 from the three-point line. She also pulled down three rebounds and dished out one assist. Sophomore forward Ester Adenike added 15 points and pulled in 14 rebounds. Freshman forward Ricka Jackson from Ewa Beach, HI, accounted for 13 points, nine rebounds, and four assists, and sophomore forward Houlfat Mahouchiza closed out the double digit scoring with 11 points, four rebounds and two assists.
The Lady Jets jumped out to a 20-15 lead at the end of the first quarter but Motlow State came back in the second quarter to go up 35-34 at the half. South Georgia Tech took charge in the second half outscoring the Lady Bucks, 39-17 to secure the 21-point win.
Freshman forward Fatou Pouye of Senegal added four points. Freshmen Cedeja James and Alyssa Nieves tossed in two points each, and another freshman, Bigue Sarr from Senegal, closed out the scoring with one point.
In the second day of the tournament, the Lady Jets rallied in the second half again to earn a 78-68 win over the Wallace State Community College Lady Lions. Adenike scored 23 points and pulled down 13 rebounds in this victory.
Mahouchiza accounted for 17 points and nine rebounds, and sophomore transfer guard Dakata Toney from Michigan stepped up to score 14 points and close out the double digit scoring.
The Lady Jets were up 27-21 at the end of the first quarter but a strong second quarter by Wallace State saw the Lady Lions pull ahead 40-36 at the half. South Georgia Tech came back in the third quarter to outscore Wallace State 27-11 to regain the lead and ultimately clinch the 78-68 win.
Sarr was four of eight from the floor to pull down eight points for the Lady Jets in that match-up. Sarr was joined by Jackson, who had seven points and eight rebounds.  Another freshman, Alyssa Nieves, came up with five points while James and Maulden closed out the scoring with two points each.
The Lady Jets will travel to Gainesville, FL on Nov. 29 to face Santa Fe College and then return home for a conference rivalry with Brandon Harrell and the Georgia Highlands College team on Dec. 2 at 1:00 p.m. in the Hangar.
The Lady Jets will also host Andrew College on Dec. 6 in a double-header with the Jets and Tallahassee Community College. Those games begin at 5:30 and 7:30 p.m.