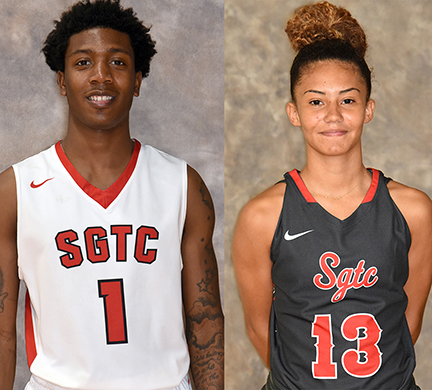 AMERICUS — For the second consecutive week South Georgia Technical College’s Jets and Lady Jets have had players selected as the Division I basketball Players of the Week for the Georgia Collegiate Athletic Association this past week.
Rico Simmons, a 5’ 9” point guard from Wilkerson County, earned the GCAA Division I Player of the Week honors for the men for the second straight week. He was joined by Lady Jets freshman guard Alyssa Nieves from Tampa, Fla., who was the women’s Division I Co-Player of the Week with Central Georgia Tech’s Fredricka Sheats.
Simmons averaged 31.5 points, seven assists, one steal, and 5.5 rebounds in two games for the Jets this past weekend to earn a repeat performance as the GCAA Player of the Week. He also set a new school record for the most points scored in a single game when he posted 42 points in the Jets 119-108 victory over Miami Dade College in Miami. The previous high had been 38 points scored in a single game.
Simmons played his freshman season with the Jets two years ago and was chosen by head coach Travis Garrett as the Most Valuable Player that year. He sat out last season but returned this year to rejoin the Jets for his sophomore season.
The Jets are currently 4 – 5 on the season and 0 – 0 in the conference.
South Georgia Tech’s Lady Jets’ Alyssa Nieves has been making her mark in the conference this season as well. She averaged 17 points, 5.5 rebounds in two wins for the Lady Jets to help lead them to a 10 – 1 record this season.
Her teammate, Esther Adenike, a 6’ 2” sophomore forward from Lagos, Nigeria, was selected as the women’s Division I Player of the Week last week.