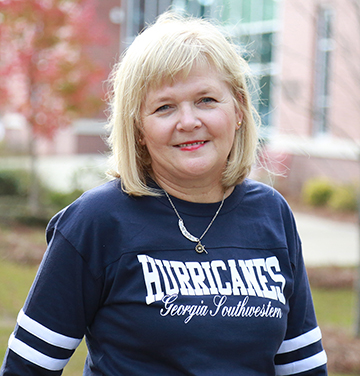 AMERICUS  — According to an April 2017 “New York Times” article by Meredith Kolodner, 41 percent of college students nationwide graduate in four years. What’s more, the longer the process takes, “the less likely a student is to make it to graduation,” Kolodner said.
So, for a student to begin college in the summer of 2008, and graduate in the fall of 2017, while missing only one semester (summers included), would be unlikely, right? Right. That is just what psychology major Janice Dale did Friday at Georgia Southwestern State University’s Fall Commencement. Her college career is the very definition of diligence and determination.
“It has always been a dream of mine to attend a good university, and earn a degree,” said Dale, who began as a non-traditional student nearly 10 years ago. “My plan was to apply myself more to studying and work harder than I did in high school. I was determined not to give up on finishing what I had started.”
Dale’s academic advisor Gary Fisk, Ph.D., said her work ethic is one other students should try to emulate.
“Janice Dale has done a terrific job of continuing with her college education in spite of the many competing demands of modern life,” said Fisk. “Her steady, determined approach has succeeded. She sets a great example for our younger students.”
Originally from Shellman, Dale graduated high school from Randolph Southern School. While majoring in psychology, she also graduates with a minor in sociology.
“I have always had an interest in the way individuals interact with one another, the roles they play, and the human mind,” Dale added. “Also, it has been interesting to learn of the different abnormal behaviors and their meanings.”
Beginning in June 2008, Dale has taken one to three courses in 28 out of 29 semesters, having earned Academic Achievement List honors in many of those. Outside of time spent studying for final exams, earning her bachelor’s degree has not come easy.
“It was challenging returning to school and dealing with the responsibility of a sick family member,” said Dale. “It was difficult at times to find a quiet spot to study. The encouragement of my family, classmates, and professors was an important factor in helping me stay with it.”
After graduation, Dale is looking forward to starting a career in the area of her major, spending more time with family and beginning graduate school.
Dale is one of 450 students expected to graduate from GSW this semester. She has set a fine example for them all.