Portch tells GSW graduates, ‘your degree is only the beginning’ 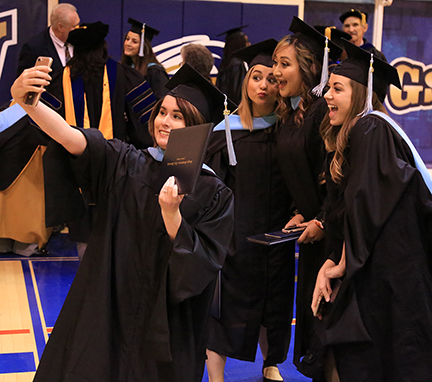 Graduates pose for a picture in excited after receiving their diplomas.

AMERICUS — One of the larger graduating classes at Georgia Southwestern State University (GSW) took their final steps on campus Friday at Fall 2017 Commencement in the Student Success Center. Approximately 450 students earned bachelor’s, master’s and specialist degrees.
The commencement speaker was University System of Georgia Chancellor Emeritus Stephen Portch, Ph.D. Portch served as USG chancellor from 1994-2001, and during his tenure, “Change” magazine selected him as one of the “21 Most Influential Voices in the Academy.”
Fall 2017 Commencement was GSW President Neal Weaver’s first opportunity to address new graduates, having begun his tenure in July. 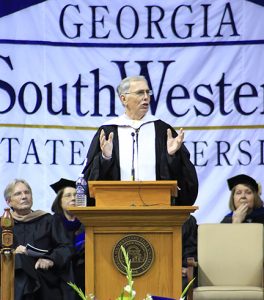 “Not only is this an exciting day for all of you, but it’s a very exciting day for me,” Weaver said to the crowd that filled the arena. “Georgia Southwestern’s campus is full of extraordinary men and women, and we cherish our unique position from which we can watch you grow and develop — both in knowledge and in maturity. Because of this, we take tremendous pride from your successes, and we take great pride in your accomplishments.
“All of us at GSW are proud of you and proud for you,” he added.
Following an introduction from Weaver, Portch led his address with a quip that “a speaker at a commencement is a necessary evil.” Portch added that he polled recent graduates by asking who their commencement speaker was and what his or her message was. “You know what most of them replied?” he asked the crowd. “… can’t remember who but remember it was too long.”
“My goal today is to be brief,” Portch said in switching to a slightly more serious tone, “to have you remember my name and offer a couple of bits of advice.”
Portch’s message encouraged the graduates to do three things in life: 1) “live with intellectual curiosity,” 2) “lead a life in the gray zone” by learning to walk in someone else’s shoes, and 3) “lead a life paying it forward and giving it back.”
“Your degree is only the beginning,” he said in closing. “What counts is what you do with what this ticket represents. For it is the entry to the next phase of that sometimes worrisome, but more often that wondrous, adventure of life. Live it to the full, and congratulations.” 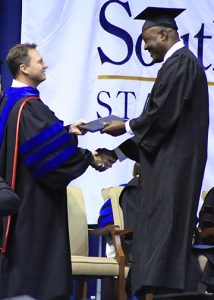 GSW President Neal Weaver hands a diploma to a graduate.