AMERICUS — The South Georgia Technical College (SGTC) Law Enforcement Academy recently held its fall graduation ceremony for the 17-02 graduating class of cadets. The ceremony was held in the John M. Pope Industrial Technology Center on the college’s Americus campus and recognized the class’ 14 graduates.
Graduating cadets included Steven Tyler Adams of Cordele, Cora Kineshell Baker of Newton, Jeffery B. Bell of Ashburn, Nathan Brown of Dawson, Anthony D. Davis of Leesburg, David Rueda Fierros of Americus, Justin Lewis of Albany, Taylor Logan Mills of Perry, Matthew B. Robinson of Oxford, Christopher Ruric Slocumb of Americus, Austin Lavon Spence of Thomasville, Brandy Lee Stokes of Cordele, Claudia Marcela Tupper of Leesburg and Odell Williams III of Dawson.
SGTC President John Watford, Ed.D., began the ceremony by welcoming the crowded room of family, friends and current law enforcement officers to the ceremony.
“This country is held together by the people who are represented here today,” Watford said referring to the graduates and the many law enforcement officers in attendance. “These individuals mean so much to us, to the college and to the community.”
Cadet Claudia Tupper delivered the invocation and led the audience in the Pledge of Allegiance before Brett Murray, program director for the SGTC Law Enforcement Academy, gave a brief overview of the class.
“Nineteen weeks ago, in early August, in the hot weather, these cadets started a journey as a larger group. Not as many are here today,” he said. “They have had the opportunity to train together, learn the law and how to enforce it, learn skills like firearms and driving, how to make an arrest and how to document it. These are skills that they’re going to take back to the communities where we all live and work.” 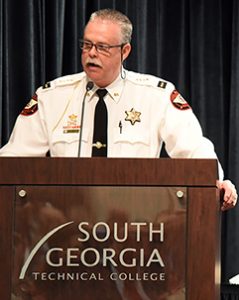 Lee County Sheriff Reggie Rachals was featured as the guest speaker of the ceremony. Rachals, who has over 35 years of law enforcement experience, began his career with the Albany Police Department in 1982, where he worked for seven years before moving to the Lee County Sheriff’s Office. He has been with the sheriff’s office since 1989, but was elected to the top spot in 2009 – a capacity in which he still serves today.
Rachals spoke to the cadets directly in his speech and shared some wisdom that he has learned during his distinguished career.
“Many moons ago, I too sat in the same situation you are now. I remember being excited and scared all at the same time,” Rachals said. “In the past weeks and months, you have learned a great deal about the career you’re starting. The days behind you should not be forgotten, but used as a building block for the rest of your career.
“As you go through your career, you will be asked to give so much of yourself. As a public servant, it’s about what you can do to help others, rather than what you can do for yourself. You will have to respond to domestic disputes, deliver death notifications to people who have lost loved ones, revisit the same house several times for the same silly dispute … but through it all, the best part is knowing that you helped someone.”
Rachals left cadets with a few final points, asking them to try not to be judgmental, to help people where they can, to love their families, and to be the best that they can be by continuing their education and training.
After Rachals’ remarks, Vanessa Wall, Dean of Homeland Security at SGTC, and Murray announced and presented the awards and scholarships to recipients.
Scholarship winners included cadet David Rueda Fierros, Lt. Michael Sangster Scholarship; cadet Taylor Mills, Lou Crouch Scholarship; cadet Cora Baker, Smallwood-Sondron Scholarship; and two former SGTC Law Enforcement Academy graduates — Charles Kinnamon and Adam O’Neal — who received the first ever Smarr-Smith Foundation Scholarship.
Award recipients included Christopher Slocumb, Top Gun Award for performing the best at the shooting range; and Matthew Robinson, Academic Achievement Award for earning the highest grade point average in the class and the Class Representative Award for being voted among his classmates to represent the class by speaking at graduation.
“We are proud to graduate from South Georgia Technical College, and thank SGTC for the opportunity to be in this position,” Robinson said in his remarks.
He recognized and thanked all adjunct instructors and staff who helped with their journey along the way, and offered a special thanks to Wall and Murray, who he said can take pride in knowing that they had a direct part in anything the cadets will accomplish in their careers.
“It’s been an interesting and challenging 18 weeks, and obviously we’ve grown very close to each other. We’re a family. But now we’re also joining a new family — a blue family,” Robinson said, referring to the police force. He then directed his attention to his fellow cadets. “The thin blue line is us — law enforcement — standing between order and chaos … There are many things waiting for us out here in this new career that we cannot control, but for you to live each day with honor, integrity and respect is a choice.”
After the cadets were presented with their certificates of completion, Director Murray provided closing remarks and Cadet Justin Lewis provided the benediction to wrap up the ceremony.