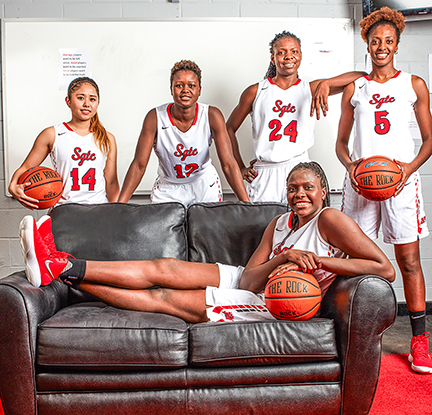 AMERICUS — Americus has always been known for its diverse culture as the birthplace of Habitat for Humanity, the Fuller Center, and through the city’s international relationships and partnerships with other countries.  Now South Georgia Technical College (SGTC) is making its mark on that international flavor by becoming a favorite spot for international basketball players at the collegiate level.
Seven international basketball players have joined the SGTC Jets and Lady Jets basketball squads for the 2017 – 2018 season as the Lady Jets attempt to return to the National Junior College Athletic Association for the second consecutive year and the Jets strive to earn their first trip to the national tournament under head coach Travis Garrett. Combined the SGTC basketball teams have made six appearances in the national tournament in nine years.
Both teams are off to a great start this season with the Lady Jets currently ranked 7th in the National Junior College Athletic Association (NJCAA) and in first place in the Georgia Collegiate Athletic Association (GCAA) with a 12 – 1 overall record and a 6 – 0 conference record. The Jets are currently in first place in the GCAA as well with a 1 – 0 conference record and a 6 – 5 overall record. They also defeated the fourth ranked team in the nation and another top ranked undefeated team from Florida.
“We have three international players that returned from last season and then we added two more freshmen this season to give us five again on the Lady Jets team,” said SGTC Athletic Director and Lady Jets head coach James Frey. “One of the returnees, Kanna Suzuki, is out for the season and has been red-shirted due to a torn ACL. She had surgery to repair it recently.”
Suzuki, a 5’ 2” point guard from Japan, helped lead the Lady Jets to the Georgia Collegiate Athletic Association Conference Title, the NJCAA Region XVII championship and their second appearance in the NJCAA national tournament in three years. The Lady Jets posted a 30 – 5 overall record last season, which tied the record for the most wins in a single season for the Jets and the Lady Jets.
The other two international players returning from last season include: forward Houlfat Mahouchiza from France, and forward Esther Adenike from Nigeria. Adenike has been the GCAA Player of the Week twice this season already and Mahouchize has already signed a letter of intent to continue her college career at the University of Minnesota in Minneapolis, a member of the Big Ten conference.
The two new international players added to the Lady Jets 2017-2018 roster include:  freshmen Fatou Pouye and Bigue Sarr from Senegal. Both played at Malick Sy in Senegal, West Africa. Pouye is a 6’ 0” forward and Sarr is a 6’ 3” center. 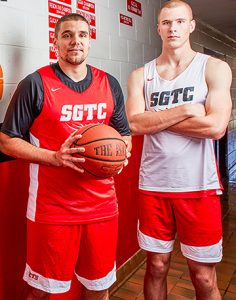 Shown, from left, are the two international players on the SGTC 2017 – 2018 Jets. They are Nemanja Jovanovic from Nish, Serba and Sam Matice from SK, Canada.

The Jets also have two international players this fall. They include: Sam Matice, a 6’ 11” forward freshman from Canada, and Nemanja Jovanovic, a 6’ 7” freshman forward from Nish, Serbia.
Both the Jets and Lady Jets line-up also includes players from four states other than Georgia on their 12-member roster. The Lady Jets feature players from Hawaii, Michigan, New Jersey, and Florida, as well as Georgia and the Jets have players from New York, South Carolina, North Carolina, and Maryland, in addition to Georgia.
This is the largest group of international players that SGTC has hosted in a single season in the history of its basketball program which began in 2001 – 2002. The Jets have fielded a total of five international players prior to this season in their 16-year history, while the Lady Jets have recruited a total of 17 in the past 13 years of the program. The five players this year expanded the Lady Jets’ number to 22 in 14 years and seven in 17-years for the Jets.
“This is a great group of student-athletes,” said Coach Frey. “They are very talented on the court but they are also well-rounded student-athletes and have adapted to the culture here in South Georgia very quickly. We laugh a lot and it is interesting when they ask for a food from their home land. Sometimes it is difficult to find that here in Americus.”
All seven players speak English, but sometimes there is a communication gap between proper English and southern English and South Georgia colloquialisms. It helps that three of the international players returned from last season and could help guide the newer recruits.
“This is an unusual situation for us, to have seven international players, but they are all very talented and seem to be a good fit for our program and our team,” said Frey. “The more success that we have on the court, the more we get noticed as a quality college and basketball program.”
Both the Jets and the Lady Jets have played at home over the Christmas break. The two teams are also hosting a Classic Tournament on Dec. 29-31. The Jets will host Wake Tech at 2 p.m. on Dec. 29 and then Lady Jets will face Cape Fear at 8 p.m. on Dec. 29.
The Jets will host St. Petersburg College at 2 p.m. on Dec. 30 and in the night cap, the 8th ranked Lady Jets will face the NJCAA top-ranked Gulf Coast Community College as part of their Classic tournament. The Lady Jets will also face East Florida College at 3 p.m. on Dec. 31 in the Hangar.