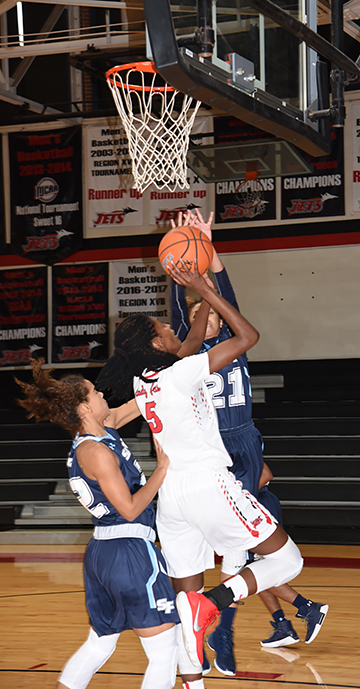 AMERICUS — The South Georgia Technical College (SGTC) national ranked Lady Jets narrowly defeated the Santa Fe College Lady Saints from Gainesville, Fla., 65 – 60 to move to 13 – 1 on the season recently in a holiday double-header, but the Jets fell to the Coastal Alabama – Monroeville Eagles 80 – 76 despite a second half surge in the second half of the double-header.
Sophomore forward Houlfat Mahouchiza from France scored the final five points of the game that allowed the Lady Jets to take the win. She hit a three-pointer with less than a minute to go and then came back and followed up with two free throws to put the game away. She also led the team in scoring with 20 points and 13 rebounds. The Lady Jets are currently 7th in the nation and first in the Georgia Collegiate Athletic Association with a 6 – 0 record.
“We did not play well in the first half at all,” said SGTC Lady Jets head coach James Frey. “But we had a strong third quarter and that was the difference in the game.” The Lady Jets did not make a single three-point shot in the first half while Santa Fe hit seven.
The Lady Jets fell behind 13 – 9 at the end of the first half and were down by as many as 10 points before closing that deficit to 29 – 22 at the end of the first half. The Lady Jets roared out in the third quarter and outscored the Lady Saints 27 – 17 in the third quarter to go up 49 – 46. The Lady Jets were able to stretch that lead to five points and hang on to a 65 – 60 victory. There either eight different lead changes and seven ties in that 40-minute contest. Both teams made five three point shots each in the second half.
Houlfat Mahouchiza was joined in double-figure scoring by sophomore Ester Adenike with 19 points and freshman Alysssa Nieves who added 10 points. Adenike from Nigera, scored 19 points for the Lady Jets and pulled down eight rebounds. Freshman Alyssa Nieves scored 10 points, all of which came in the second half. Freshman Bigue Sarr from Siberia, added nine points and had 13 rebounds. Fatou Pouye tossed in three points and Ricka Jackson and Kayla Holmes closed out the scoring for the Lady Jets with two points each.
Stephanie Jackson and Brianna Richardson hit 10 of Sante Fe’s 12 three-point shots and accounted for 38 of their teams 60 points on the night.
After that exciting win for the Lady Jets, the South Georgia Technical College Jets came out and despite battling back in the second half, came up four points shy of the victory in an 80 – 76 decision against Coastal Alabama-Monroeville. 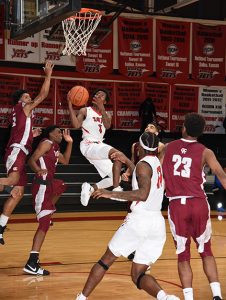 The Jets were down as many as 12 points in the second half before coming back and tying the game in the final minutes. However, Coastal Alabama was able to pull ahead and hang on to the 80 – 76 win.
Sophomore guard Rico Simmons led the Jets in scoring with 24 points. He had four three-point shots, four from the two-point range and four free-throws. He also had two rebounds and three assists. Three other Jets were in double-figures as well. Sophomore Marquel Wiggins had 14 points and six rebounds. Dawan Bass added 12 points and four rebounds and Adonis Green came away with 10 points and seven rebounds.
Sophomore Mike Boone had seven points and four assists, Dominique Walker came off the bench to score five points and Da’Monte Greene closed out the scoring with four points.
The Jets are still tops in the Georgia Collegiate Athletic Association (GCAA) conference with a 1 – 0 record but they fell to 6 – 6 overall.
The two teams are enjoying a Christmas break but return to the courts to host the Jets and Lady Jets classics which begin Friday, Dec. 29 at home. The Jets open at 3 p.m. on Friday with a match-up against Wake Tech and then face St. Petersburg College at 2 p.m. on Saturday, Dec. 30. The Lady Jets will host Cape Fear at 8 p.m. on Dec. 29 and then match-up with the number one team in the nation, Gulf Coast, at 8 p.m. on Dec. 30. The Lady Jets will close out their tournament at 3 p.m. on Dec. 31 with a game against East Florida College.