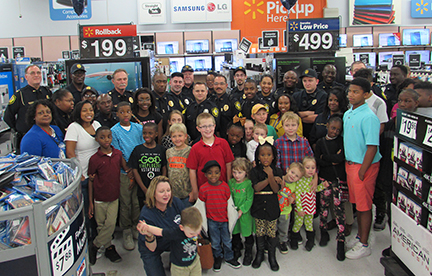 The entire group — children, families, cops and volunteers are shown in Walmart.

AMERICUS — There was an electric-like charge or excitement in the air at The Roman Oven Pizzeria on an early evening a couple of weeks prior to Christmas. 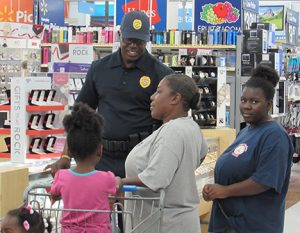 GSW Police Officer Michael Lewis assists a family in selecting what they want to purchase. 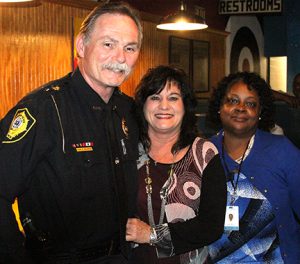 Shown from left at the pre-shopping pizza party are APD Maj. Richard McCorkle, his wife Carleen, and Janet Shelley, an APD records clerk and Clerk of Municipal Court.

The room was filled with the happy, smiling faces of children and their parents, as well as law enforcement officers from the Americus Police Department and Georgia Southwestern State University (GSW).
The occasion was Shop with a Cop, when children recommended by the Georgia Department of Family and Children Services are paired with a law enforcement officer and taken on a shopping spree at Walmart. These kids are foster children and most were squirming with anticipation, although enjoying a pizza dinner at the restaurant prior to shopping. 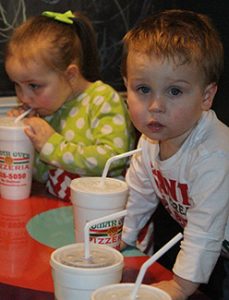 These two cute children were powering up with coke and pizza prior to the shopping with a cop experience at Walmart.

This year, 25 children were identified and there was not a dour face in the crowd, not among families or officers or their spouses.
The Times-Recorder joined the happy group and asked some of the children what they intended to purchase on their shopping adventure. Some of their answers were surprising.
Brodie, 9, knew exactly what he wanted: an Imagine Xbox Extreme. He described it as “like a robot with wings in the back and Batman fists, and a motorcycle.” He even knew the price of $98.
Four-year-old Riley was so enthusiastic he was bobbing up and down in the booth with his mom. He wanted a Spider Man toy.
Kaitlyn, 4, said she wanted to purchase a Moana doll and a Frozen bicycle.
Ke’teah, 8, a third-grader, wanted a Hello Kitty karaoke, an electric scooter and “different kinds of toys.”
Damario, 11, said he didn’t know yet what he would buy. Faith, 11, said she wouldn’t know until she got to the store. Franklin, 9, wanted to get an Xbox and a Nintendo 3DS. Jeremiah, 8, wanted a PS4 and a little RK, both computer games.
Chase, 2, wanted a train, according to his mother. She said he loves Thomas the Train.
Christian, 10, said he would get his family something for Christmas on the shopping trip. He actually had already made a list and it included something for himself as well — a remote controlled truck. 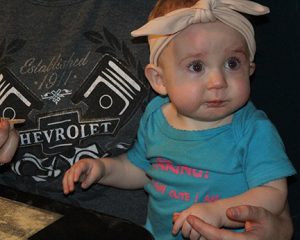 Shown above, even the youngest were ready to eat and shop.

Then you had some teens, whose ideas were quite different. Torris, 14, was only interested in buying clothes. Others didn’t know yet.
The adult volunteers also shared their feelings with the Times-Recorder. Carleen McCorkle, wife of Maj. Richard McCorkle of the Americus Police Department (APD) said she enjoyed “the joy of giving.” Her husband said, “There’s not a lot that separates us from kids struggling. … We have an opportunity to help these kids. Without this we don’t know what kind of Christmas they would have.”
Janet Shelley of the APD said this is her second year with the project. “I enjoy the fellowship and it gives us something to do outside the office. I like sharing with the children on such a special event.”
APD Sgt. Carolina Pittman said it’s a pleasure to help the kids. “It’s fun and they’re all having a good time.” Her son Sheldon had come along to volunteer as well.
APD Det. Cedric Smith said his reward is seeing the smiles on the kids’ faces.
GSW Officer Ethan Johnson said this was his first time for the event and he and his wife Hannah were looking forward to shopping with the children. Michael Johnston, also an officer with GSW, said it was also his first time. GSW Office Michael Lewis said he’s done it before but it’s always fun. “To put a smile on a child’s face at Christmas time — it’s heartwarming to be a part of that,” he said.
That about summed the evening up: smiles on the faces of children.