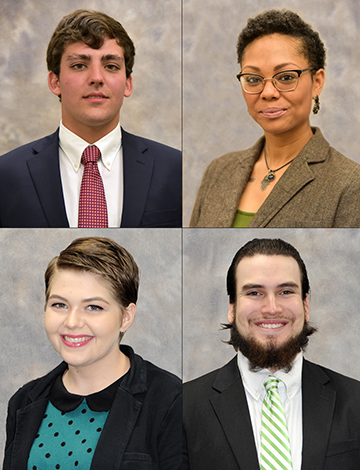 Clockwise from top left are GOAL semi-finalists Bailey Mills, Stephanie L. John, Noah McCleskey and Alexandra Joiner. in order for a chance to compete for the statewide GOAL title.

AMERICUS — Four South Georgia Technical College (SGTC) students have been selected as the college’s semi-finalists for the Georgia Occupational Award of Leadership (GOAL), according to Cynthia Carter, coordinator for the SGTC GOAL program.
Chosen as semifinalists are: Bailey Mills of Cordele, aviation maintenance technology; Stephanie L. John of Ellaville, networking Sspecialist; Noah McCleskey of Pinehurst, welding & joining technology; and Alexandra M. Joiner of Cordele, marketing management.
GOAL, a statewide program of the Technical College System of Georgia, honors excellence in academics and leadership among the state’s technical college students. GOAL winners are selected at each of the state’s 22 technical colleges.
All the college GOAL winners will compete in regional judging, which will include students from the other 21 colleges of the Technical College System of Georgia.
GOAL winners from each college will compete in regional judging in February. In April, all college winners will come to Atlanta where the nine regional finalists, three finalists from each of the three regions, will be announced and compete at the state-level in April and one student will be named as the statewide GOAL winner.
“The purpose of the GOAL program is to spotlight the outstanding achievement by students in Georgia’s technical colleges and to emphasize the importance of technical education in today’s global workforce,” said Carter.
According to Carter, a screening committee of administrators at SGTC selected the four semi-finalists from a list of students nominated by their instructors. The screening committee included Deborah Jones, Ed.D., assistant vice president of Student Navigation and Institutional Support; Mark Brooks, director of Administrative Services; Julie Partain, dean for Enrollment Management; Sammy Stone, director of Campus Safety; and Dianne Trueblood, Information Systems director.
“The next step is for a panel of business, civic and industry leaders from the community to interview and evaluate these four students and select one to be the college’s 2018 GOAL winner,” explained Carter. “The one judged most outstanding will compete in regional judging. Three finalists from the region will be named and will compete in the state GOAL competition in Atlanta in April 2018 and vie to be named as the 2018 statewide GOAL winner.”
The State GOAL Winner becomes the student ambassador for the Technical College System of Georgia and receives a grand prize of a new car provided by Kia, the statewide corporate sponsor of Georgia’s GOAL program.
Additional GOAL nominees for SGTC included Jeremiah L. Lumpkin of Mauk, air conditioning technology; Tiana K. Reese of Americus, culinary arts; Shaketia N. Tyson of Americus, criminal justice technology; Paul D. Strozier of Ellerslie, diesel equipment technology; and Desiray C. Kenney of Cordele, accounting.