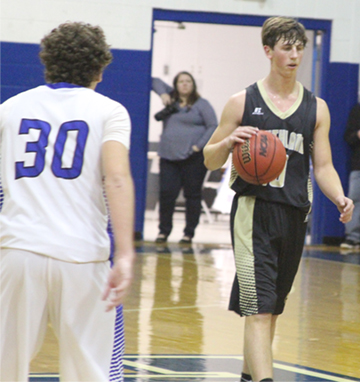 DAWSON – Senior leadership played a key role for the Southland Raiders Tuesday night as seniors Saige Batten and Alex Roach both scored in double figures to lead the Raiders to a 55-48 victory over Terrell Academy.

Batten led all scorers with 23 points and Roach poured in 16.

In spite of the victory, Southland Head Coach Rundy Foster was not totally pleased with his team’s performance and knows that much work needs to be done as the Raiders head into GISA AAAA Region 3 play. “I didn’t think we played as well offensively as I would have liked”, Foster said. “When we got up by 16 in the fourth quarter, we got a little impatient with the basketball. We need to focus more on the details and more on the little things … making better decisions with the ball, especially towards the end of the game.”

Roach, who recently scored the 1,000th point of his career, was happy just to get the win. “We didn’t play as good as we could have, but we got the win so that’s all that really matters”, Roach said.

It was a hard-fought first half between both teams, but Southland Academy went into the locker room at halftime with a 29-20 lead, thanks largely to 13 first-half points by Batten. The third quarter was an evenly-matched quarter as both teams, for the most part, traded baskets. However, with a little over two minutes left in the third, Batten scored on a lay up, giving the Raiders a 13-point lead. Batten then scored another basket as he drove to the basket, threw the ball off the backboard, and laid it in, increasing Southland’s lead to 15. By the end of the third quarter, Southland enjoyed a commanding 44-30 lead.

With just under 6 minutes to go in the game, and Southland leading 46-32, Alex Roach’s pass was stolen by Matthews Ivey, who drove to the basket and scored, prompting Rundy Foster to call a time out to settle his team down. However, Terrell Academy’s Colby Barbosa scored to cut the lead to 10. The Raiders went on a 4-0 run, but Ivey hit a three-pointer to give the Eagles some hope with a little over two minutes left in the game. Then with a minute left, Ivey hit another three-pointer, cutting the Raiders’ lead to 50-42.

Alex Roach was fouled on the Raiders’ next possession and made both free-throws, but the Eagles would not go away as Garrett Sloan scored, was fouled and made the free throw, cutting the lead to 52-45.

However, that would be as close as the Eagles would get as the Raiders were able to finish the game with a 55-48 victory.

“We executed well and we’re getting ready for region play”, Saige Batten said. “We want to step up and play hard in our region.”

Terrell Academy had two players in double figures. Matthews Ivey led the Eagles with 20 points on the night and Garrett Sloan chipped in 11. The Raiders will open Region 3 play Friday night at Tiftarea Academy.