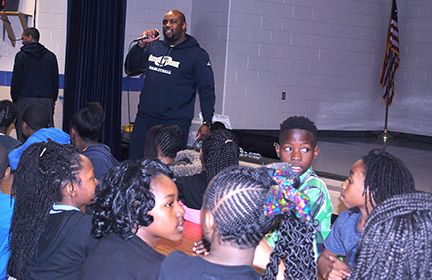 Sumter County Intermediate School fourth-grade students recently had exciting visitors! The Georgia Southwestern State University’s (GSW) basketball players, coaches and Surge, GSW’s mascot, met with the students in the lunchroom. They came to get the students pumped up about attending the GSW vs. Albany State game in the Storm Dome at GSW. The players introduced themselves and told the students a little about themselves. The head coach, Ben Hicks, gave an exciting speech to the students to get them pumped up for the upcoming game.