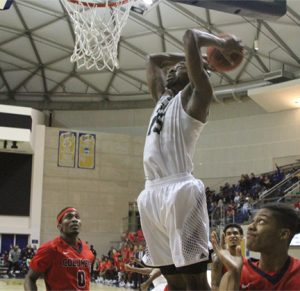 AMERICUS – The Georgia Southwestern Hurricanes displayed their version of the “Human Highlight Factory” as they executed some ally oop slam dunks and hit several three-pointers, taking firm control in the second half on their way to an 83-72 Peach Belt Conference victory over Columbus St. in the Storm Dome Wednesday night.

The final score was not indicative of how dominating the Hurricanes were over the Cougars.

Senior Forward Hasaan Buggs earned his fifth straight double double, leading Georgia Southwestern with 19 points and hauling down 14 rebounds. Not to be out done, his teammate, Junior Guard R.J. Sessions, the Peach Belt Conference Player of the Week, also scored 19 points. The Hurricanes had two other players in double figures: Junior Guard Quenten Taylor poured in 14 points, including going 8-9 from the charity stripe, and Junior Guard Devin Watson scored 10 points in the winning cause.

Georgia Southwestern Head Coach Ben Hicks, a former assistant to Columbus St. Head Coach Robert Moore, knew the Cougars strengths and weaknesses and put in a game plan for victory. “One thing we feel like we can do is control the game”, Coach Hicks said. “That’s my former boss. I came from Columbus St. I knew the system. I felt like we locked in. If we guard their action, we would come out with a win tonight. We controlled the game on both ends and we were able to come out with the win.”

For Georgia Southwestern to be successful, Coach Hicks knows that Hasaan Buggs has to bring his A game every night. “He’s are only senor and he’s probably our best post player on the inside”, Hicks said. “In order for us to be successful, he has to come out and play like that every night.”

For the first 10 minutes of the first half, both teams played an exciting, run and gun brand of basketball. With Georgia Southwestern up 13-10 early in the half, Quenten Taylor threw an ally oop pass to Buggs, who promptly dunked the basketball, electrifying the crowd.

Payne finished the first half with 12 points, while the Hurricanes were led by R.J. Sessions with 8 points. 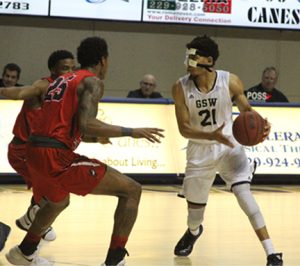 However, the Hurricanes came out of the locker on fire, going on an 8-0 run capped off by a three-pointer by Sessions, prompting Columbus St. Head Coach Robert Moore to call a time out with just under 18 minutes to go. The Cougars were able to get a three-point play coming out of the time out as Junior Guard Rudy Winters scored, was fouled and hit the free throw.

But that didn’t stop the onslaught of the Hurricanes as Quenten Taylor drove to the basket and scored, increasing the Hurricanes’ lead to 52-36.

Midway through the second half, the Cougars tried to disrupt the Hurricanes attack with full court pressure, but Georgia Southwestern was able to break the press and get a layup by Sessions.

The Hurricanes continued their onslaught in the second half as they moved the ball swiftly on offense to find the open man. It paid off as they were able to find Buggs for a two-handed slam. On their next possession, Sessions got in on the act as he slammed home two points to put the Hurricanes up 60-44. Georgia Southwestern also excelled on the defensive end as they stifled the Cougars attack. Columbus St. was never able to cut the Hurricanes lead under double digits as Georgia Southwestern continued to hit on all cylinders in the second half. With just a little over four minutes left in the game, Freshman Guard Jason Weaver scored, putting Georgia Southwestern up 74-57. By this time, it was academic as the Hurricanes were able to empty their bench and closed out the game.

For the Cougars, Rudy Winters led all scorers with 21 points. Columbus St. had two other players in double figures: Jacori Payne scored 18 points and Sophomore Guard Jalen Thomas scored 11 in the losing cause.

With the win, the Hurricanes improve to 8-3 overall and 4-3 in the Peach Belt Conference. They will try to continue their winning ways when they host Francis Marion University Saturday at 3:30 pm.