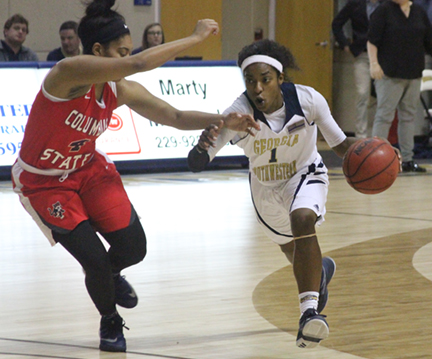 AMERICUS – Down by 18 points in the second half to Columbus St., the Georgia Southwestern Lady Hurricanes staged a furious 15-4 run to get back in the game and got the fans in the Storm Dome excited. However, Columbus St., led by Senior Guard Machala Raymonville’s 16 points and 12 rebounds, was able to hold on and win by the score of 70-62.

What really hurt the Lady Hurricanes in this game was some hot shooting by the Lady Cougars in the second quarter. Columbus St. shot 12-20, 60% from the field in the second quarter, while Georgia Southwestern shot just 18%, 2-11 from the field. “The second quarter really killed us”, Georgia Southwestern Head Coach Kelly Britsky said. “We got some good shots but couldn’t hit them. They got some momentum going and they’re a team that really thrives on momentum. They’re quick. I was proud of the girls that came out after halftime. They really fought. We won the second half. I was excited about the desire, the fight and the no-quit attitude tonight.”

Junior Forward Tyisha Moore led the Lady Hurricanes with a double-double, scoring 16 points and grabbing 11 rebounds. “Me and my teammates work hard every day to fight for the wins”, Moore said. “We just have to come together. I feel like we played hard. We played with heart. We gave it our all. We want it bad. We keep falling short, but there are things we can work on to get better.”

However, the Lady Cougars came out on fire to start the second quarter, building a double digit lead. Columbus St. Continued to pour it on in the quarter, building their lead to 34-19 on a basket from Junior Guard Tatum Jarvis before Kelly Britsky called a time out late in the first half. The Lady Cougars out worked Georgia Southwestern on the glass with 1:48 to go in the half as Machala Raymonville rebounded her missed shot and scored. The Lady Hurricanes ended a long scoring drought when Junior Center Patra Paris scored with 1:33 to go in the half to make it 38-21 in favor of Columbus St. Tamecia Blue scored the Lady Hurricanes final basket of the half before Columbus St. put their final stamp on their domination of the first half when Junior Guard Sabria Cotton nailed a three-pointer to give the Cougars a 42-23 lead at halftime.

In the first few minutes of the second half, the Lady Hurricanes tried to climb back in it as Tyisha Moore powered her way to the basket and scored, making it 44-27 Columbus St. However, the Lady Cougars continued to get offensive rebounds and second-chance shots as they were able to build a 50-29 lead with a little under 6 minutes left in the third quarter.

The Lady Hurricanes were able to make a mini-run as they scored five straight points, including a three-pointer by Blue. Then GSW Senior Guard Britany Grant nailed a three-pointer, cutting the deficit to 13. However, Machala Raymonville nailed a three-pointer with a little over three minutes to go in the third quarter, followed by a basket by Junior Forward Toxiana Wilson, which put Columbus St. back up 55-37.

The Lady Hurricanes would not go away though. They went on a 6-0 run capped off by a basket by Patra Paris, cutting the deficit to 55-43. Then with 25.1 seconds left in the third quarter, Tyisha Moore was fouled while shooting and hit both free throws, cutting the deficit to 10. Columbus St. would answer though as Raymonville scored at the end of the quarter, giving the Lady Cougars a 57-45 lead.

Raymonville led off the scoring to start the fourth quarter for Columbus St., putting the Lady Cougars up by 14. On the Lady Hurricanes next possession, Tyisha Moore was whistled for travelling. Georgia Southwestern would not quit as Tamecia Blue hit a three-pointer, which led to the Lady Hurricanes cutting the deficit to 59-50. Then with 5:57 left in the game. Senior Guard Shanaya Jones scored to cut the deficit to 59-52, prompting a time out by Columbus St. Head Coach Anita Howard.

The time out seemed to settle the Lady Cougars down a little bit as they were able to increase their lead back up to double digits. Georgia Southwestern responded a few minutes later as Moore drove to the basket, scored and was fouled, cutting the deficit to 63-56. However, Moore was unable to complete the three-point play.

Columbus St. was able to maintain their double-digit lead in the waning minutes of the game. The Lady Hurricanes got a three-pointer from Senior Guard Gabby Figgers with two seconds left, but it was too little too late.

The Lady Cougars had two other players in double-figures. Tatum Jarvis finished with 13 points and Tatiana Wayne chipped in 10. Georgia Southwestern will try to get back into the win column when they host Francis Marion University on Saturday at 1:30 pm.