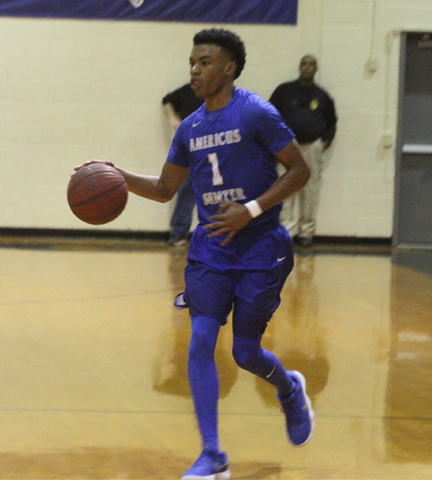 ALBANY – After the Panthers historic 125-122 six-overtime win over Carver this past Friday night, one might wonder if they had enough energy to compete with an extremely athletic Westover team 24 hours later. The answer was an emphatic yes. The Panthers were able to play fast and furious with Westover. However, a critical turnover late in the game by the Panthers and clutch free throw shooting by Westover senior shooting guard Kris Gardner gave the Patriots a hard-fought 68-63 win, handing the Panthers their second loss of the season.

“With young minds, I knew it was going to besdifficult to get them geared up for another intensive battle”, Americus-Sumter Head Coach Michael Hoffpauir said. “There were some questionable calls. We don’t like to make excuses, but the foul call against Traveon Brown at a critical point of the game hurt us.” Hoffpauir was referring to what he though was a questionable foul call against Brown which resulted in Brown fouling out.

The Panthers had two players in double figures. Junior guard Joshua Lusane led all scorers with 19 points and senior forward Sh’Qual White scored 11 in the losing cause. “I told the team that I was very proud of their effort”, Hoffpauir said.

Westover jumped out to a 13-6 lead to start the game, but the Panthers got back in it with a 9-2 run to tie the score at 15-15. However, senior point guard Camryn Weston gave Westover an 18-15 lead on a three-pointer at the buzzer to end the first quarter. It was an exciting end-to-end affair in the second quarter as well, but the Panthers would go into halftime trailing the Patriots 42-39. Joshua Lusane led the Panthers in first-half scoring with 12 points, while the Patriots were led in the first half by Weston with 13.

Both teams struggled to score in the third quarter, but with Westover up 46-42, Americus-Sumter senior point guard Eric Hall Jr. who scored 38 in the six-overtime win the night before, drove to the basket and scored, cutting Westover’s lead to 46-44 with around two minutes left in the third quarter. However, the Patriots went on a 6-2 run to close out the third quarter and led 52-46.

With Westover leading 53-46 early in the fourth quarter, sophomore guard A’jarrien Banks weaved his way through the Patriot defense and scored on a layup, cutting the lead to five.
About two minutes later, Americus-Sumter crept to within one when sophomore guard Traveon Brown hit two free throws, making the score 53-52 Westover. However, the Patriots went on a 5-0 run capped off by a three-point play from junior guard Jordan Brown.

The Panthers took their first lead of the ball game when Traveon Brown was fouled and hit both free throws. Westover tied it back up with a basket from junior guard Michael Isler Jr.. With 2:02 to go in the game, Jordan Brown was fouled and made one free throw, giving the Patriots a one-point lead. However, with 1:31 to go, senior guard Jerod Holt Jr. had a chance to give Westover a three-point lead when he was fouled and went to the line to shoot a one-and-one. Holt missed the free throw, the Panthers got the rebound and head coach Michael Hoffpauir called time out with 1:22 left.

However, Eric Hall Jr. was called for traveling, giving Westover the ball. On the Patriots next possession, Kris Gardner was fouled and made both free throws, making the lead 63-60 Westover. Lusane was able to score for the Panthers, cutting the deficit to 63-62, but Camryn Weston scored to put Westover’s lead back up to three. The Panthers were working the ball around to try to find a three-point shot, but they turned the ball over and had to foul Gardner. Gardner made both free throws to put the Patriots up 67-62. At that point, it was too little too late as the Panthers would fall to Westover 68-63.

For Westover, they had three players in double figures. Both Kris Gardner and Camryn Weston each had 17 points and Jordan Brown chipped in 13. With the loss, the Panthers fall to 15-2 overall and 4-2 in region play.