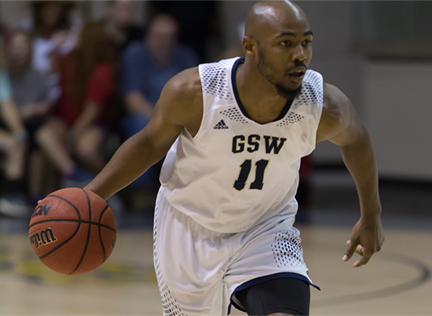 AMERICUS – The Hurricanes’ five-game winning streak came to an end Monday as the University of North Carolina at Pembroke, the Peach Belt Conference leaders, came into the Storm Dome and dealt GSW a 78-57 defeat. The first half went back and forth as the teams were tied on nine occasions. GSW had the lead four times and neither side was ahead by more than five points.

With 12 minutes left in the first half, GSW grabbed its first lead of the game when Devin Watson nailed a three-pointer, giving the Hurricanes a 9-7 lead. A few minutes later, R.J. Sessions hit a three-pointer to give GSW a 22-19 lead with 6:02 remaining in the half. The Hurricanes enjoyed their final lead of the game when Hasaan Buggs scored on a layup with 42 seconds left.

Things began to unravel for GSW in the second half when UNC-Pembroke went on an 8-0 run. During that stretch, GSW went on a stretch of their own in which they missed nine consecutive shots.

Defense kept GSW in the game as the Hurricanes were able to stay within five points of the Braves as late as the 10:37 mark. However, GSW went cold from the field again, and UNC-Pembroke went on a 13-2 run to put the game away. One big factor in this game was that the Braves outrebounded the Hurricanes 47-30.

In spite of the loss, Dajion Macklien, subbing for starter Quenten Taylor, who was injured, made 6-10 of his shots, leading the Hurricanes with 12 points. Andre Statam scored 11 and Sessions scored nine points and hauled down 11 rebounds. UNC-Pembroke was led in scoring by Brandon Watts, who scored 19 points.

With the loss, GSW falls to 9-4 overall and 5-4 in the PBC. The Hurricanes will try to rebound as they travel to Flagler College on Thursday. Tip-off is scheduled for 7:30 p.m.