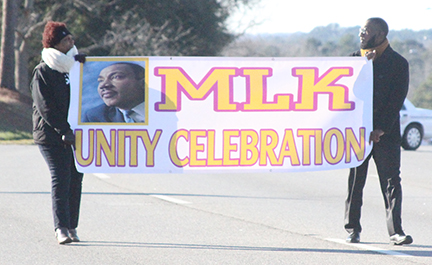 The banner was displayed at the beginning of the parade through downtown Americus Saturday in observance of Martin Luther King Jr.'s birthday.

AMERICUS — On Saturday, a small gathering from Americus and surrounding areas braved the cold, windy weather conditions together to remember the legacy of the Rev. Martin Luther King Jr. (MLK), whose birthday was on Monday.
It was the MLK Unity Celebration, a time of fellowship, fun and reflection on King’s impact on the local community and the nation as a whole.
The festivities began at 12:30 p.m. at Lenny’s Market, where several speakers spoke for two hours about what King’s legacy meant to them personally and how everyone can work to make his dream a reality.
The emphasis was on unity and uniting together to help make King’s dream of making the world a better place for all. Later that afternoon at 3:15, people gathered outside the Sumter County Courthouse, where the keynote speaker, the Rev. Marcus Arnett, spoke about the journey toward unity that all men and women are on.
“Let us come together, all races, all creeds and all colors working together as one, loving together as one”, Arnett told the assembled crowd. “This journey that we are on begs us to love one another just as Jesus commanded us to do, regardless of our differences.” Near the end of his speech, Arnett made this statement: “We cannot fight this alone. We cannot walk this alone. We will not walk this alone. That is why, my brothers and sisters, we must all leave here today with a common understanding. You cannot spell unity without U and I”, he said.
Nadine Pope, a native of Americus, is the chair for the MLK Unity Celebration. “This is actually an honor to me. I started working with the MLK Celebration years ago”, 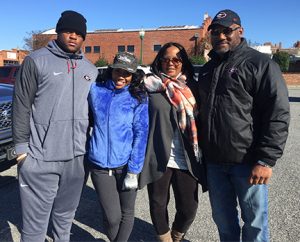 Pope said. “The late Bessie Sampson was the founder of this celebration years ago, and I started helping her then. I decided last year that I wanted to do a little bit more to honor a great icon in America who came through Americus in the ‘60s. It means so much to me to honor him. This is actually the 50th celebration of Dr. King.”
A group from the Americus Chapter of the Boy Scouts of America was also at the celebration. One of their members, Americus native Curtis Smith, said he was excited to learn more history about King. “It’s an honor to be here to learn some more history on Dr. King because he was very influential in the United States, not just the surrounding area”, he said.  “It gives us the opportunity to learn more. I’m enjoying what I’m hearing.”
Anne Johnson, who lives in Albany, is the president and CEO of Hands Extended Across Reaching Together (H.E.A.R.T), a non-profit organization dedicated to assisting those who are in underprivileged and low-income situations in the community. “We sponsor the Martin Luther King Celebration in Albany every year”, Johnson said. “Monday will be our 38th annual celebration. Tammy Pettyjohn Jones, who is the coordinator of this event, put out a flyer for the community to come, so I came in regards to paying respect to Dr. King and this program here in Sumter County.” Johnson went on to say that the celebration was important to her because, in her words, King brought unity. “Dr. King wanted unity, and that’s what this program is all about. It all comes down to our coming together to make this country a better place”, she said. 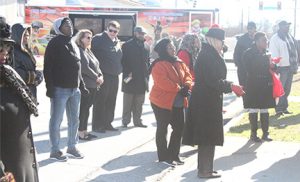 The crowds attended Saturday’s events in spite of the cold, windy conditions.

The celebration also had significant meaning for Tawanna Wright. An Americus native, Wright founded Wright Networking for Hometown Heroes, a non-profit organization with the purpose to recognize outstanding achievements of local individuals, small businesses and/or entrepreneurs. “It’s history that has helped our black American ancestors to help us to understand what we fought for to have this honor today”, Wright said. “He (Dr. King) stood for freedom of speech and our civil rights. It’s just good to know that we have a day of memory of him to show that he’s not forgotten.”
Former Americus-Sumter football stand-out and current UGA defensive end Tyler Clark was also at the celebration. Later that afternoon at 4 p.m., Clark was one of three Grand Marshals of the parade which went through downtown Americus. The other two were the mothers of the two police offers killed in Americus on Dec. 7, 2016: Sumter County Sgt. Sharron Johnson, mother of fallen officer Jody Smith, and Janice Smarr, mother of fallen officer Nick Smarr. Clark was honored to be a part of the celebration. “It means a lot because my community, coming together to have the parade for me … my homecoming after the championship”, Clark said.
One of the other members of the Boy Scouts, Kevin McCluster, was excited about being a part of the celebration and learning more about King. “It’s a great program they’ve put together”, McCluster said. “It means a lot because, like, you’re bringing the community together. We’ve got different people here. It’s about unity.”
Before Arnett’s speech at the Sumter County Courthouse, the Rev. Sterling Vereen gave the opening prayer. Vereen reminded those assembled that God had a plan to use someone to take a stand for what’s right in America.
“He (King) came here with love in his heart and not hate. He came with peace, but it was the peace of God, and through all these things that he had done on this earth, we have a right to stand here in memory, and recognize the great accomplishment that he has done”, Vereen continued.
The overall message of last Saturday’s MLK Unity Celebration can be summed up in what Arnett said near the end of his speech. “We cannot go back in time and change anything in the past”, Arnett said. “What we can do is to lend ourselves to the greater good of all mankind, hoping and praying that one day, a dream uttered in Washington, D.C., over 50 years ago will finally manifest itself.”