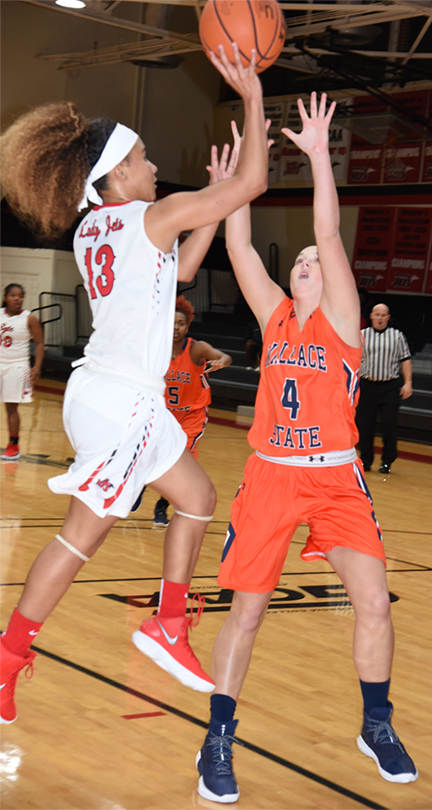 SGT Freshman guard Alyssa Nieves goes up for a shot against Karlie Hudson of Wallace State during first meeting in November.

HANCEVILLE, AL – Low scoring and too many turnovers doomed the 14th-ranked South Georgia Tech Lady Jets as they fell to Wallace State 56-48 at Tom Drake Coliseum.

“We did not play well play well”, South Georgia Tech Head Coach James Frey said. “When you turn the ball over and miss easy shots, you are not going to win against good opponents. We just proved that. Wallace State got after it and did what they needed to do to win.”

South Georgia Tech defeated Wallace State 78-68 in the Lady Jets Thanksgiving Classic, but the Lady Lions were able to avenge that loss on their home floor in Alabama.

“Wallace State shut down our inside game and we didn’t shoot the ball well from the outside”, Grey said. “We have got to get back to the drawing board and make some adjustments.”

One factor contributing to the Lady Jets’ defeat was that they committed 27 turnovers.

By the end of the first quarter, the Lady Jets had a 16-12 lead. However, the Lady Lions outscored South Georgia Tech 17-11 in the second quarter to take a 29-27 halftime lead.

The Lady Jets will try to get back in the win column when they travel to Warner Robins to take on Central Georgia Tech. Game time is slated for 2 p.m. on Saturday.