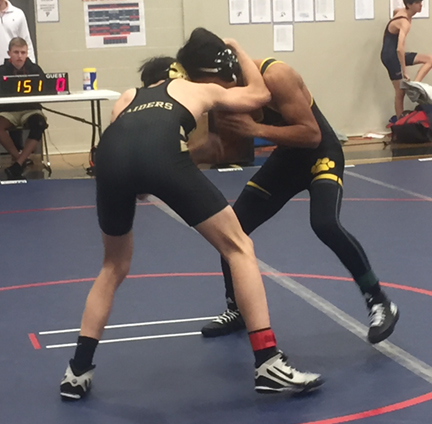 ALBANY – The Southland Wrestling Team, fresh off the Trinity-Dublin tournament, traveled to Deerfield-Windsor Thursday night to compete in a tune-up tournament.

It was an exhibition tournament involving Southland, as well as Albany-area GHSA schools such as Westover and Monroe. Dougherty was invited, but had to cancel at the last minute.

“Tonight, this an area match between the local schools”, Southland Head Coach Mike Smith said. “This is a time that we get together before region so that the wrestlers can get in a couple of matches to get prepared for region. This is not a dual format or an individual tournament.”

“It was pretty good. I was going for a tech (mercy rule) in the last round. I had three more points to get a tech”, Landreth said. “I’ll end up having to face him in the region championship.”

Another Raider who had a good night on the mat was Morgan Youngdale. Trailing Monroe’s Bevin Glanton by Four points, Youngdale was able to pin Glanton to get the win. “I feel I could have done a little better, but it was a good match”, Youngdale said. “I’ve been working on pacing myself a little bit and not trying to get the first-round pin as much as wrestling a more conservative way so I can’t make stupid mistake like I have in the past.”

Youngdale likes the challenge that wrestling against a GHSA program provides. “We like to wrestle Monroe because they have a really good program that we don’t see in the GISA”, Youngdale said. “They have a really aggressive style of wrestling.”

Overall, the Southland team did well in the exhibition. The Raiders notched at least 10 wins, eight of those wins came on pins. “The thing about wrestling, when you get down to the end of the season, you need mat time. That way you can work on things that you didn’t do a good job on, and get prepared for region”, Coach Smith said. “Overall, I was pleased with the performance and the attitude of the kids tonight.”

Up next for the Raiders is the GISA Region 3-AAA Tournament at Deerfield-Windsor Tuesday, January 23. The GISA State Tournament will be held Friday and Saturday, February 2 and 3, at the Storm Dome.