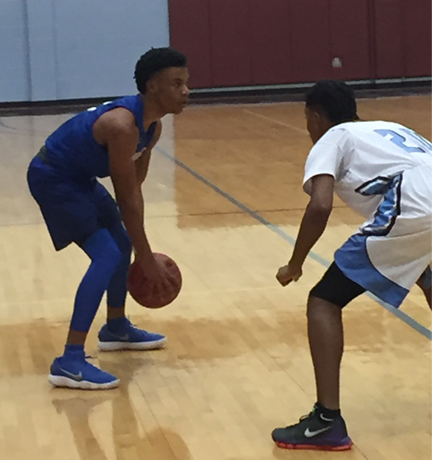 Americus-Sumter's Eric Hall with the ball against a Carver defender.

COLUMBUS – It was the game all of the ASH and Carver fans were waiting for: the rematch. Only a week after Americus-Sumter won that historic 125-122 six-overtime thriller over Carver, the two teams met Saturday night for the rematch in Columbus. As was the case last week, both teams put on a show. It came down to the last shot in regulation. With Americus-Sumter up by three, Devin Flowers attempted a three-pointer to tie the game for Carver and send it into overtime. However, Flowers’ attempt fell short and the Panthers escaped 55-52.

The first half of this game was just like last week, with both teams playing a run-and-gun style of basketball and scoring back-and-forth. However, with 1:44 to go in the half, Carver had a 22-20 lead and the ball. With no shot clock in Georgia high school basketball, Carver Head Coach Warren Beaulah instructed his team to stall and run the clock all the way down for the last shot.

However, with about ten seconds left in the half, Carver’s Dexter Simmons tried a three-pointer from the corner, but his shot was blocked by Joshua Lusane. Eric Hall pushed the ball down for the Panthers to try to give them the last shot. With about four seconds left, Hall through a cross-court pass to Traveon Brown. Brown’s three-point attempt at the buzzer was close, but didn’t go in. The Panthers would have to settle being behind Carver 22-20 at halftime.

The Panthers started out strong in the second half as they went on a 6-0 run. Then with 5:50 left in the third, the Panthers had a 28-24 lead when Lusane made a behind-the-back pass to Elliz Knighton, who scored on a layup. The Panthers would later increase their lead to 34-26 when Eric Hall was fouled and made both free throws. For the next few minutes of the quarter, it was a back-and-forth affair with both teams scoring. However, Americus-Sumter had increased their lead to 42-33. Then with the third quarter winding down, Brown hit a jumper with about 15 seconds left. Carver stalled for the last shot of the quarter and they got it as Jarius Thomas scored on the inside to end the quarter.

Americus-Sumter had a 50-44 lead late in the game when Brown scored and was fouled. Brown made the free throw, giving the Panthers a 53-44 lead. However, Carver went on a 5-0 run to cut the lead to four. Then with a little over a minute to go in the game, and the Panthers still up 53-49, Eric Hall was dribbling the ball to try to run out the clock, but Carver’s A.J. Watts stole the ball and scored on a break-away layup. The Tigers were within two. Then with 31.6 seconds to go, Brown was fouled and hit both free throws. On Carver’s next possession, Americus-Sumter’s Kobe Lewis went for the steal, but was called for a foul. Watts went to the foul line for Carver for two shots, but only made one, making the score 55-52 in favor of the Panthers. Americus-Sumter moved the ball around the perimeter, with Carver not electing to foul quickly. However, the Panthers turned it over with 11.5 seconds left, giving the Tigers one last opportunity to tie the game. However, Carver guard Devin Flower’s three-point attempt at the buzzer was short, and the Panthers escaped Columbus with a 55-52 hard-fought win.

With the win, the Panthers improve to 17-2 overall and are 6-2 in Region 1-AAAA play. They continue region play when they travel to Cairo on Tuesday, followed by a home game Friday night against Hardaway.