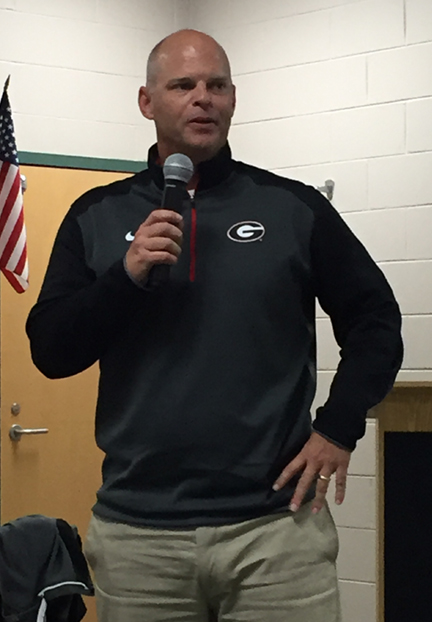 ELLAVILLE – It was a time of fun, food, fellowship and a silent auction Monday night as the Schley County Baseball Team kicked off its 2018 season with their inaugural First Pitch Banquet at Schley County High School.

The keynote speaker at the banquet was University of Georgia Head Baseball Coach Scott Stricklin. Stricklin spoke to the entire crowd gathered in the school’s cafeteria, but his message was mainly for the team.

Coach Stricklin started off his speech by talking about the upcoming season for his team, the Georgia Bulldogs. In his statement about his club and their upcoming campaign, he made a rather humorous comment. “I’m excited about our club. For many of you who followed us last year, we played six freshmen almost every single game”, Stricklin told the crowd. “Any of you who saw me a couple of years ago, I had a full head of hair before that started. When you play freshman, you’re going to see some things you haven’t seen before. The great thing about freshmen is that they turn into sophomores.”

Coach Stricklin then turned his attention to the GHSA Class A defending state champions seated to his left. He began to address the team on the matter of what college coaches look for and what a high school baseball player needs to do to get noticed. 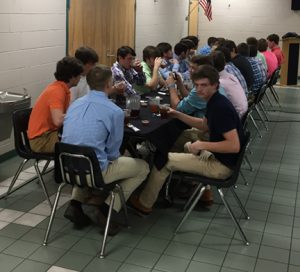 “The eye test is really easy. We’re all looking for the 6’3, 195-pound guy that looks really good, but once you get on the field, what do you do, because at the end of the day, that’s what it’s all about. Can you get it done”, Stricklin said? “We all know that guy…that 6’3, 195-pound guy that can do everything better than anyone else, but isn’t the best player on the team. It’s the dude that’s 5’9, 150 pounds. That’s the best player on the team because he works so hard and he plays so hard. We are trying to find that 6’3, 195 guy that has that attitude of the 5’9, 150 guy. That’s hard to find. That’s what superstars are made of”, he continued.

Coach Stricklin went on to address the players about the importance of pitchers being able to cause hitters to swing and miss, and the importance of hitters being able to get the barrel of the bat on the ball, even if they go 0 for 4. “You might go 0 for 4, but you can still have a good day in my eyes”, Stricklin said. “You may have an eight-pitch at bat, foul some pitches off. You might move a guy over from first to second, but I write down in the book: hard contact, battler, team player. That’s what I’m looking for”, he continued. Most importantly, however, Stricklin stressed the fact that at UGA, he wants players that he can enjoy being around and that are coachable. “It’s really difficult to coach a kid who is not coachable”, Stricklin said. “We’re going to watch everything that you are doing as a baseball player. How do you get on and off the field? Is it a chore for you to get out there, or are you sprinting out there? Are you getting back into the dugout? Is it fun for you?”

Coach Stricklin stressed to the players that college coaches are watching to see how players react to adversity. He said that there were players he wanted to recruit turn him off because of their attitudes. “I saw a kid spit at an umpire. There’s no way I’m coaching that kid. I saw a player in between games yell at his mom because she got him the wrong kind of Poweraid. There’s no way I’m coaching that kid”, Stricklin said. Stricklin challenged the Schley County players to honestly look at themselves and assess what kind of player they are and what kind of player they want to be. He continued by saying that once he is interested in a player, he will contact that player’s coach. “The really good high school coaches are honest about their players”, Stricklin said. 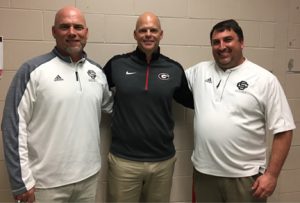 He challenged the players to be good team players when they’re not playing, and to have a positive attitude. He referred to Alabama quarterback Jalen Hurts cheering on his team after he was benched to start the second half of the national championship game against Georgia. He also talked about his favorite Major League Baseball player: former Los Angeles Angels of Anaheim Shortstop David Eckstein. Stricklin told the team that Eckstein didn’t have all the physical tools, but he was able to play 12 seasons in the major leagues because he played harder than anybody else.

Stricklin also addressed the players about how social media could get them in trouble as far as getting a baseball scholarship is concerned. “I can promise you there’s probably been a dozen players that I’ve recruited in my lifetime as a coach that I have crossed off because of a tweet”, Stricklin said. “That’s what I’m going to look at. When you go for a job when you get out of college, that’s what they look at”, he continued.

Finally, Stricklin reminded the players that if they want to play at the next level or they want to be a starter at the high school varsity level, they need to do things the right way because everybody is watching them. He encouraged them to work hard and be respectful to their parents, teachers and coaches, and to set their goals very high.

The evening ended with a short question and answer time with Coach Stricklin, and there was also a silent auction of various items. The auction ended 30 minutes after Coach Stricklin finished his speech.