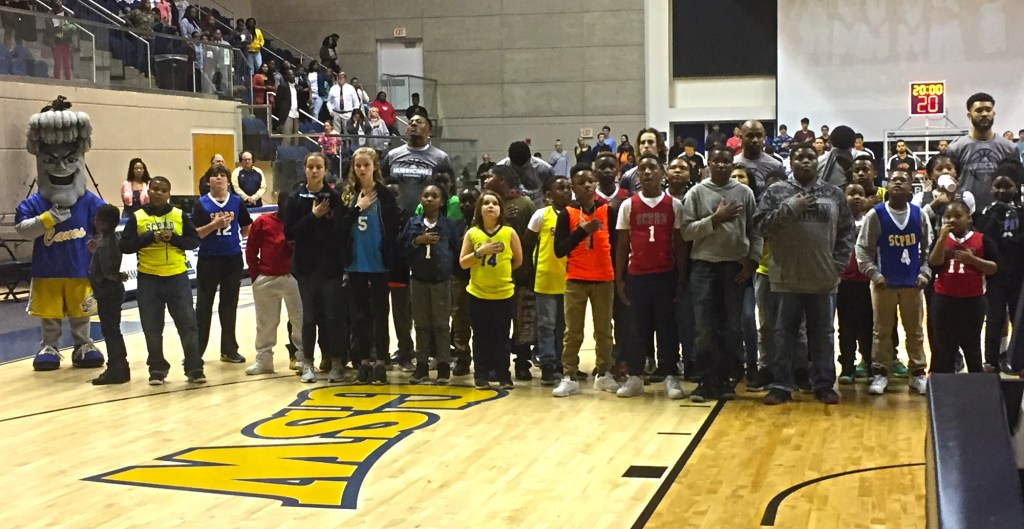 AMERICUS – It was Sumter County Parks and Recreation Night at the Storm Dome as the GSW Hurricanes took on PBC foe Clayton St. Wednesday night. The players, coaches and parents were treated to what they thought would be a come-from behind victory, but it was not to be as the Lakers were able to hold on and defeat Georgia Southwestern State 75-69.

The Hurricanes trailed by as much as 16, but roared back to take the lead with 5:40 to play in the game. However, with the Hurricanes leading 69-68 with 2:16 to go, Clayton State’s Kyle Kincey nailed a three-pointer to give the Lakers back the lead, a lead which they would not relinquish on their way to their 10th win of the season. The Lakers have now won six of its last eight games to improve to 10-8 overall and 8-3 in the PBC.

Hasaan Buggs scored his eighth double-double of the season with 15 points and 12 rebounds to lead the Hurricanes. Aubrey McRae led the Lakers with a game-high 22 points.

GSW fell behind early 11-3. The Lakers eventually increased the margin to 16 when Justin Tuckson hit a jumper, making the score 37-21 with 8:49 left in the half. Clayton State went into halftime, leading the Hurricanes 46-33.

The Hurricanes started out of the gate strong, scoring the first seven points of the second half. However, the Lakers responded by increasing their lead back up to 12 at 56-44. Then with 12:30 to play, the Hurricanes found their second win as they went on a 13-0 run, capped off by a strong drive to the basket by Dajion Macklien. Macklien’s basket gave the Hurricanes the lead for the first time in the game with 7:40 to go. Both teams flip-flopped the lead over the next 5 1/2 minutes until Kyle Kincey hit a three-pointer with 2:16 to go to put the Clayton State up 71-69. The Hurricanes tried to answer with a three-point attempt by R.J. Sessions, but it was off the mark. The Lakers sealed their victory by hitting four consecutive free throws in the closing seconds. 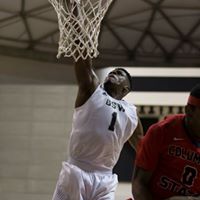 GSW junior guard R.J. Sessions going up for a dunk against Columbus St. He scored 17 points against Clayton State.

The Lakers lead the PBC in assists and three-point field goal percentage, and it showed Wednesday night. Clayton State dished out 17 assists and hit 7-of-13 from beyond the arc (53.8 percent). Georgia Southwestern was out-rebounded 42-34 and committed 13 turnovers.

In addition to Buggs performance, Devin Watson scored 18 points, including hitting 3-of-5 from beyond the arc. Sessions was also in double-figures, scoring 17. The Lakers’ bench scored 20 points, while the GSW bench scored 11.