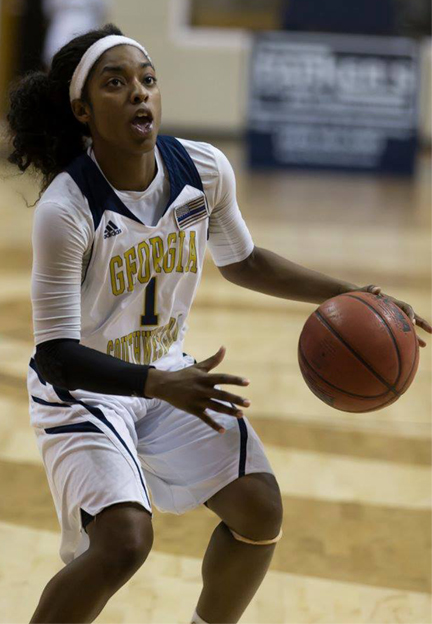 Shanya Jones with the basketball. She scored five points in the win over Clayton St.

AMERICUS – The GSW Lady Hurricanes used a second-half run and strong defense to notch a 58-52 win over the Lady Lakers in the Storm Dome Wednesday Night.

Many youth players, coaches and parents were there to celebrate Sumter County Parks and Recreation Night with the Georgia Southwestern State men’s and women’s teams.

It was an historic win for the Lady Hurricanes. Since GSW transitioned to the NCAA Division II level, the Lady Hurricanes had only beaten Clayton State once in GSW history, until Wednesday night. The first win over the Lady Lakers was a 71-59 win on January 27, 2016 at the Storm Dome.

The Lady Lakers were led by Aleisha Merriweather’s 13 points and eight rebounds.

With the win, GSW has now won two straight. They improve to 6-10 overall and 3-9 in the Peach Belt Conference.

GSW played solid defense in the fourth quarter and went on a 14-6 run through the first eight minutes to take a 12-point lead. Clayton State was not able to recover, and the Lady Hurricanes held on for a 58-52 victory.