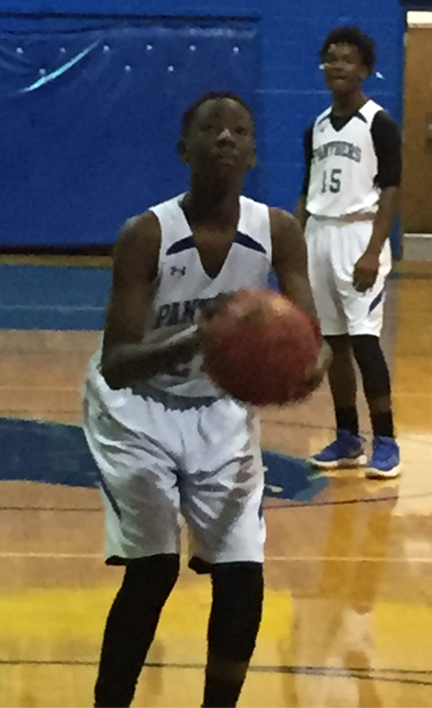 Kyric Davis of SCMS about to shoot a free throw

AMERICUS – The boys’ championship of the Deep South Middle School Conference was on the line Wednesday night as Sumter County faced off with Macon County. Both teams fought to the bitter end, as one would expect. However, Macon County withstood a valiant comeback by the Panthers in the fourth quarter to win the Deep South Middle School Conference Championship by the score of 51-46.
Cameron Evans led the way for the Panthers with 19 points and Elijah Westbrook scored eight points in the losing cause. The Bulldogs had three players in double-figures. Kyree Brown led the way with 14 points. Shonquavious Byse scored 11 points and Daquan Brown chipped in 10 points in the winning cause.
“We came back and fought, but we just came up short”, Evans said. “Next year, we’ve got to come back and win.”
According to SCMS Head Coach Rodney Shelton, it came down to execution and dictating the style of play. “We played against a tough basketball team. We played them twice during the season”, Shelton said. “The first time, they beat us when we played them early in the season, then we came back and beat them the second time. I knew it wasn’t going to be easy, and it wasn’t. They’re (Macon County) a good basketball team, and we allowed them to play the game they wanted to play instead of playing the game we wanted to play. They got a lot of loose balls that we should have gotten. They got a lot of rebounds that we should have gotten, and we missed a lot of layups. It happens. I’m proud of my guys. We finished the season 11-3. Overall, it was a great season.”
Macon County came out of the gates strong in the first quarter, having a 12-6 lead at the quarter’s end. However, Sumter County went on a 6-1 run in the second quarter to take a 13-12 lead.
Both teams traded baskets in the second quarter. Throughout the second quarter, it was a fast-pace style of basketball between both teams. However, Macon County went on 14-7 run to close out the first half, leading the Panthers 26-20.
It was balanced scoring for the Panthers in the first half, as TyQuan Robinson, Elijah Westbrook, Trauntavious Robinson and Kyric Davis each had four first-half points. Macon County was led in the first half by Kyree Brown with 10 points.

Trauntavious Robinson of SCMS fighting for a rebound. Photo by Ken Gustafson

The Bulldogs came out strong to start the second half by scoring the first four points of the game, taking a 30-20 lead. the Panthers struggled to score early in the second half. However, with 3:38 to go and the Bulldogs leading 32-21, Sumter County’s Cameron Evans nailed a three-pointer to cut the deficit to eight. Both teams traded baskets for the next minute or so, but Evans hit a jump shot to keep the Panthers to within ten at 38-28. However, the third quarter ended with Macon up by 12 at 40-28.
Evans hit another three-pointer to start the fourth quarter, cutting the deficit to 40-31, but Macon County answered when Kyree Brown scored to put the lead back up to 11. Both teams traded baskets for the next couple of minutes, but Cameron Evans scored again to cut the Panthers’ deficit to 48-41 with under three minutes to go. Then with 1:30 to go, Evans struck again for Sumter County as he hit another three-pointer, cutting the Bulldogs’ lead to 50-44. That electrified the Sumter County fans, raising the decibel level in the Sumter County Middle School Gymnasium.
Macon County led 50-44 with 1:03 to go in the game. The Bulldogs tried to stall to run some clock, and Sumter County elected not to foul. Then with around 40 seconds left, the Panthers got a steal and Evans scored again, cutting the Bulldogs’ lead to 50-46. Then with 17 seconds left in the game, Macon County’s Marcus Sanders was fouled, but missed the front end of a one-and-one. The Panthers fouled again, this time sending Shonquavious Byse to the line. Byse made one of two free throws. The Panthers were unable to cut into the lead, and Macon County emerged as campions 51-46.