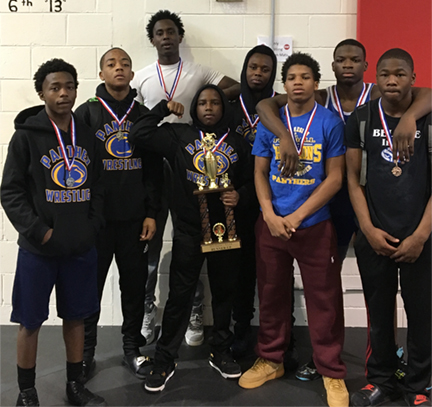 CAIRO – It was a great weekend for the Americus-Sumter Wrestling Team as the team finished in second place overall in the Region 1-AAAA Tournament on Friday, January 26, at Cairo High School.
In addition to the impressive team accomplishment, several individual wrestlers placed first through third, qualifying themselves for next week’s sectionals.
Three ASH wrestlers won the individual region championship in their respective weight classes: Henry Wilson Jr. (182 lb.), A.J. Stokes (152 lb.) and Montrellis Wilson (145 lb.).
Three Panther wrestlers finished in second place individually in their weight classes: Quindarius Walker (220 lb.), Kylen Carter (113 lb.) and Frank Lewis (195 lb.). Jarvis Berry (132 lb.) and Calvin Wright III (160 lb.) each finished in third place in the region in their respective weight classes.
As a result of their accomplishments at the region tournament, all of these wrestlers have qualified for sectionals next week at Woodward Academy in Atlanta.
“Every wrestler has pushed themselves and worked hard to obtain individual and team goals”, ASH Wrestling Coach Thomas Prater said. “The wrestlers are always looking at their performance to improve upon.”
During halftime of the boys’ basketball game against Hardaway later that evening, the team walked into the gymnasium and was greeted with a round of applause from the fans. Assistant coach Jon Rechtorvic walked into the gym along with the team. Coach Rechtorvic was holding the second-place team trophy for all the fans to see. “I was at the other end watching them walk through, enjoying the moment”, Prater said. ASH Assistant wrestling coach Jon Rechtorvic holds the second-place trophy as he and the team walk into the gymnasium at halftime of the boys’ basketball game Friday night, January 26.

The team will wrestle in the sectionals at Woodward Academy in Atlanta on Friday and Saturday. Friday’s competition will begin around 3 p.m. and last to around 10 p.m. Saturday’s competition begins in the morning and will last until about 4 p.m.