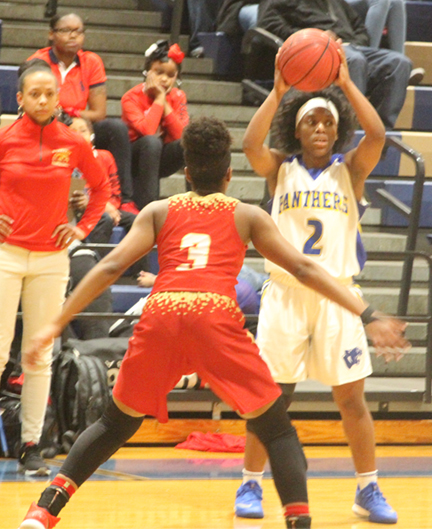 AMERICUS – The Lady Panthers (16-5, 6-4) got more than what they bargained on Friday, January 26, from a Hardaway squad that came into this game 9-12 overall and 2-9 in Region 1-AAAA. The Lady Hawks got to within five points late in the fourth quarter, but clutch free-throw shooting by the Lady Panthers down the stretch was key to Americus-Sumter coming away with a 57-50 victory.

“We came in and we knocked down free throws. We’ve been working on them all season”, ASH Head Coach Sherri Harris said. “The last two games, we’ve been putting them in the basket. Hopefully that trend can continue.”
Jykiera Long led the way for Americus-Sumter with 20 points on the night, and Deasia Ford scored 10. Brianna Pope was also a factor in the win, as she scored eight points for the Lady Panthers. “I believe that we did a good job. We hit our free throws”, Long said. “Our transition was good. We got the ball, rotated the ball and held it. We did what we were supposed to do. We came out with a win.”
It was a back-and-forth affair in the first quarter, with the Lady Hawks owning a 15-14 lead by the quarter’s end.  The same was true in the second quarter, as both teams traded baskets. However, with under a minute remaining in the first half, and the Lady Panthers up 24-22, Jykiera Long got a steal, went coast-to-coast, scored and got fouled. Long converted the three-point play. However, just before the half ended, Hardaway’s Genesis Adams scored, and ASH maintained a 27-24 halftime lead.
Jykiera Long lead the Lady Panthers with 11 first-half points, while Adams led the Lady Hawks with nine points in the half.
Each team traded a basket in the first few minutes of the third quarter. Then Long found Deasia Ford on the inside for a layup to give Americus-Sumter a 31-26 lead. A few seconds later, Ford scored again, and ASH had a seven-point lead with a little over four minutes to go. Both teams struggled to score during the next several minutes of the third quarter until Nyja Carson scored to give ASH a 35-28 lead. Then Long got the ball off a missed shot from Hardaway and took it coast-to-coast for a layup, giving Americus-Sumter a 37-29 lead. With 10.8 seconds left, Brianna Pope was fouled shooting and made both free throws, giving the Lady Panthers a 39-30 lead. However, Americus-Sumter was not done. Jykiera Long got a steal and nailed a three-pointer at the buzzer to give ASH a 42-30 lead at the end of the third quarter.
The Lady Panthers scored the first two baskets of the fourth quarter as they were able to find holes in the Hardaway defense. ASH enjoyed a 46-30 lead when Sherri Harris called timeout at the 6:08 mark of the fourth quarter. However, the Lady Hawks would not go away as they went on a 6-0 run, capped off by a three-point play by Deyanna McKinney. At this point, ASH was up 46-36. The run was stopped when Yolanna Tyson was fouled and made both free throws for the Lady Panthers. 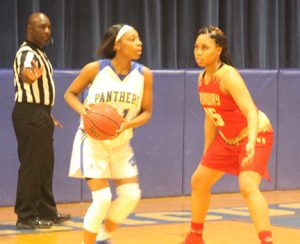 The Lady Hawks scored two straight baskets to cut the ASH lead to eight until Nyja Carson was fouled shooting and hit one of two free throws. By this time, ASH had a 49-40 lead. Both teams traded baskets during the next minute or so. Then Hardaway went on a 7-2 run, capped off by a three-pointer by McKinney, cutting the Lady Panthers’ lead to 53-48. However, the Lady Panthers were able to make free throws down the stretch and hold on to win 57-50. Though she’s happy with her team’s victory, Coach Harris knows some improvements still need to be made. “We’re still giving up too many offensive rebounds”, Harris said. ”
As for Hardaway (9-13, 2-10), they had two players in double-figures. L’Trinity Eubanks led the Lady Hawks with 20 points and Deyanna McKinney scored 12.