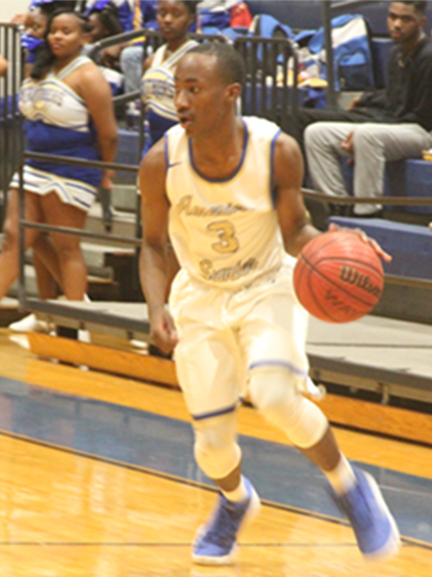 AMERICUS -It was a fast-paced, run-and-gun game between Americus-Sumter and Hardaway on Friday night, January 26. It was a close game at the half as well. However, the Panthers took charge in the third quarter, going on a 16-4 run which effectively put away the game, giving Americus-Sumter (19-2, 8-2) a 70-50 win.
Though he was happy with the win, Americus-Sumter Head Coach Michael Hoffpauir wants to see his team start the game with better energy.
“That’s one of the things I shared with them in the locker room after the game. We need to come out with better energy”, Hoffpauir said. “We did a good job defensively, but in the second half, we turned it up a little bit. We got a few more traps in and put more pressure on them. One of our strengths is our numbers and that we are deep. We wore them down. It paid off in the long run.”
The Panthers had three players in double-figures. Traveon Brown led the way for ASH as he poured in 18 points on the night. Eric Hall scored 15 and Joshua Lusane scored 10.
“We played great defense tonight and we did a good job sharing the ball”, Brown said.
The first quarter was a tightly-played, back-and-forth affair between both teams, with the Panthers having the lead 12-11 at the end of the first quarter. The second quarter had everything one could want in a basketball game: great defense, three-pointers and dunks.
The second quarter was an electrifying quarter as both teams went back and forth trading baskets. Then with Americus-Sumter leading 23-21 late in the first half, Joshua Lusane drove to the basket and dunked the ball one-handed, electrifying the crowd. That sparked a 5-0 run by the Panthers to close out the first half. ASH went into the locker room with a 28-21 halftime lead.
Eric Hall led the Panthers’ attack in the first half, scoring 12 first-half points. Ahmad Maddox led the Hawks in the first half with nine points. Americus-Sumter forward Sam Crumbley with the ball against Hardaway

Both teams traded baskets for the first few minutes of the third quarter, with ASH enjoying a 32-24 lead. Then Traveon Brown drove to the basket, scored and was fouled. Brown made the free throw and the Panthers were up 35-24. Then Brown struck again a few seconds later as he hit a three-pointer. Just like that, ASH was up 38-24 with a little over four minutes to go in the third quarter. Hardaway hit a scoring drought late in the third quarter, and the Panthers took advantage as Brown scored again on a layup. The Hawks were unable to score on their next possession, and the Panthers got another basket, this time by Eric Hall. The third quarter belonged totally to Americus-Sumter as they went on a 16-4 run, capped off by an ally-oop dunk by Lusane. At this point, the Hawks called timeout, but the Panthers were firmly in control with a 48-28 lead. The Panthers were able to go on this run due to their high-pressure defense, which created turnovers, and poor shooting from Hardaway. By the end of the third quarter, the Panthers were up 49-30.
To start the fourth quarter, the Hawks tried full-court pressure, but the Panthers shredded it and scored on layups. By the 7:05 mark of the fourth quarter, ASH had a 54-30 lead. The closest Hardaway could get was within 18 points, and the Panthers would go on to win 70-50.
As for the Hawks (7-15, 4-8), they had two players in double-figures. Orion Lowe led Hardaway with 13 points and Ahmad Maddox scored 12.
According to Score Atlanta’s GHSA boys basketball high school rankings, the Panthers are currently ranked third in the state in GHSA Class AAAA behind St. Pius and Upson-Lee.