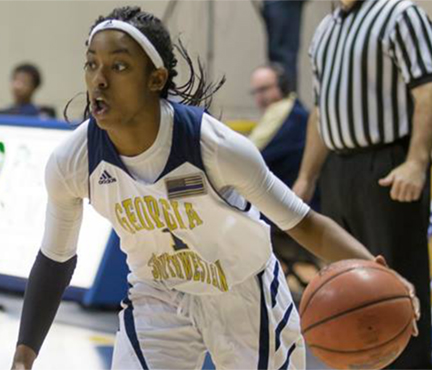 GSW's Shanya Jones with the basketball against North Georgia. Jones scored 13 points in the loss to UNG.

AMERICUS – The No. 21 ranked North Georgia Lady Nighthawks used a big third-quarter run to overtake GSW and defeat the Lady Hurricanes 83-70 at the Storm Dome on Saturday, January 27.

The loss puts the Lady Hurricanes at 6-11 overall and 3-10 in the Peach Belt Conference.

North Georgia’s Mackenzie Darrah had a double-double with 18 points and 10 rebounds to lead the Lady Nighthawks (15-2, 10-1 PBC).

North Georgia scored the first six points of the game before Tyisha Moore scored a basket to get GSW on the board. Moore’s basket started an 8-2 run by GSW. With three minutes left in the first quarter, GSW had a 15-14 lead before UNG used a 9-1 run to close out the first quarter, leading 23-16.

In the second quarter, it was a back-and-forth affair as both teams shot 60 percent from the field. Each team scored 27 points in the quarter, and North Georgia led 50-43 at the half.

North Georgia had its biggest lead of the game at 80-56 with 3:58 remaining in the game. However, GSW would not quit. The Lady Hurricanes went on a 14-3 run in the final four minutes, but it was not enough to overcome the double-digit deficit. North Georgia left Americus with an 83-70 win.

The Hurricanes were effective on the defensive end. They scored 24 points off 25 North Georgia turnovers. However, GSW was outrebounded 50-40 by the visitors from Dahlonega. UNG outscored the Lady Hurricanes 56-36 in the paint.

On a positive note, GSW had 11 different players score, the most of the season to this point.

The Lady Hurricanes will try to get back into the win column when they travel to Milledgeville, GA to take on Georgia College. Tip-off is scheduled for 5:30 p.m. on Wednesday, January 31.