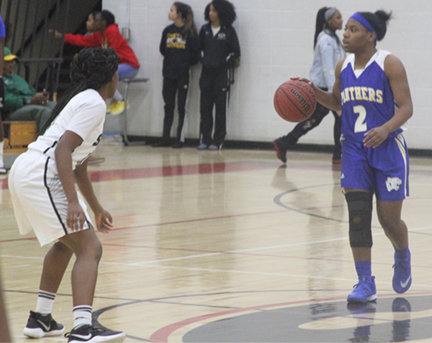 COLUMBUS – Thanks to an early 11-0 run by Americus-Sumter, and Shaw’s inability to make shots in the second half, the Lady Panthers were able to secure a 40-27 win at Shaw High School.

“I think we did pretty good. We could have done more on offense”, ASH point guard Shidajah Johnson said. “We turned the ball over so many times, but we came up with the win.”

With the win, Americus-Sumter improves its overall record to 18-5 and 8-4 in Region 1-AAAA play. They are currently in third place behind Westover and Carver. Carver has already wrapped up first place in the region for the regular season and will be the number one seed in next week’s Region 1-AAAA Tournament.

The Lady Panthers had two players in double-figures. Jykiera Long led ASH with 14 points and Deasia Ford scored 12. The Lady Raiders were led in scoring by Laneja Warner and Jerica Jackson. Each scored eight points in the loss.

The game began ominously for Shaw as they were assessed a technical foul before the game because of a discrepancy in the score book. Shidajah Johnson made one of the technical foul shots. As a result of the technical, Americus-Sumter got the ball to start the game. ASH scored ten-straight points to take an 11-0 lead. Shaw finally got in the board when Laneja Warner scored. At that point, the Lady Raiders were able to make a short run of their own, cutting the ASH lead to 13-6. This prompted ASH Coach Sherri Harris to call a timeout with under a minute left in the first quarter. By the end of the quarter, Americus-Sumter enjoyed a 15-6 lead.

The Lady Panthers went on a 9-4 run in the second quarter, capped off by a three-pointer by Jykiera Long, making the score 24-10 in favor of Americus-Sumter. However, the Lady Raiders went on a 6-0 run with Warner making the last basket before Harris called another timeout. At this point, Shaw had cut into the lead at 24-16. Then with 37 seconds left in the half and the Lady Panthers leading 25-16, Warner was fouled and made both free throws. ASH got the last basket of the half when Brianna Pope scored on the inside. At halftime, Americus-Sumter led 27-18. 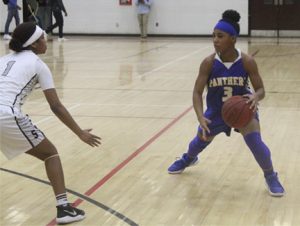 With 50 seconds left in the third quarter, the Lady Panthers decided to stall and move the ball around the perimeter. They ran the clock all the way down to almost the end of the quarter to hold for the last shot. However, they weren’t able to get a shot off and led 29-25 by the quarter’s end.

Jerica Jackson got the Lady Raiders even closer when she scored to start the fourth quarter. Americus-Sumter struggled to find their rhythm during the first three minutes of the fourth quarter. They didn’t score until the 4:44 mark when Nyja Carson scored on a layup.

With 3:12 left in the game, Americus-Sumter had a 32-27 lead, but turned the ball over on a five-second call. This gave Shaw a chance to cut into the lead, but the Lady Raiders were unable to take advantage. With 2:43 to go, Jykiera Long was fouled and hit both free throws, giving ASH a seven-point lead. Then Brianna Pope scored with a little over two minutes left to give the Lady Panthers a 36-27 lead. Shaw was able to force turnovers, but continued to be cold from the field. The Lady Raiders continued to miss a lot of easy shots, making it easier for Americus-Sumter. Long was fouled again with around 36 seconds to go and hit one of two free throws. The Lady Panthers outscored Shaw 11-2 in the fourth quarter to seal the win.

Though she’s happy with the win and the overall performance, Coach Harris was not pleased with her team’s performance in a certain category. “We gave up entirely too many offensive rebounds in the second half”, Coach Harris said. “If I’m not mistaken, every basket they (Shaw) scored was off of a second-chance opportunity. We did play pretty good head-on-ball defense, but when they (Shaw) got second and third-chance opportunities, that put us in bad positions, but luckily, we withstood the punch and came out with the victory.”

Next up for the Lady Panthers is a trip back to Columbus on Friday, February 2, to take on Hardaway. Tip-off is scheduled for 6 p.m. Their final game of the regular season will be a home game against Westover at 6 p.m. Saturday, February 3.