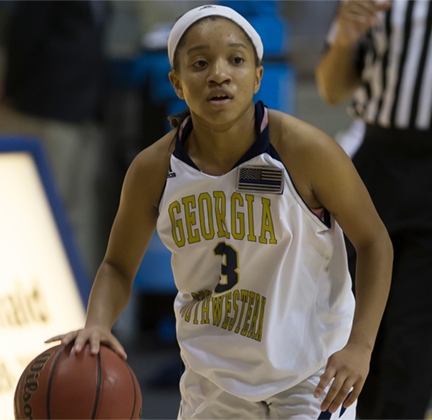 GSW sophomore guard Kya Cochran with the ball: She hit one free throw against Georgia College

GSW senior point guard Shanya Jones led the Lady Hurricanes with 14 points, with 10 of them coming in the second half.

Georgia College was led in scoring by Shay Tarver. Tarver scored 22 points and grabbed five rebounds. The Lady Bobcats improve to 13-7 overall and 10-4 in the PBC.

Georgia College outscored the Lady Hurricanes 12-3 in the first quarter. GSW only shot 20 percent from the field during the quarter. It was a deficit from which GSW couldn’t recover.

GSW played much better in the third quarter, outscoring Georgia College 16-14. Figgers nailed a three-pointer with 3:30 to go to make it a 12-point lead for GC. However, a layup and a free throw from Brianna Davis pushed the lead back up to 15. During the final three minutes of the third quarter, GSW only made two free throws, cutting the GC lead to 49-36 to start the fourth quarter.

On two occasions, the Lady Hurricanes cut the Lady Bobcats’ lead to 11 points. Lauren Duncan hit a three-pointer at the 7:07 mark. Then at the 4:21 mark, Kris Beckham scored on a layup. However, that would be as close as the Lady Hurricanes would get. Figgers hit her fourth three-pointer of the night as the horn sounded to make it a 68-54 loss. Figgers finished the night going four-for-eight from beyond the arc, scoring 12 points. Figgers came into Wednesday night’s game ranked fourth in the PBC in three-point shooting and shot 50 percent from beyond the arc against Georgia College. That performance pushes her average up to 40.2 percent on the season. Figgers also did a good job defensively, recording three steals.

As a team, however, sub-par shooting really hurt the Lady Hurricanes in this game. They shot 29.2 percent from the floor on the night. They were also outscored 40-22 in the paint.

On a positive note, GSW outrebounded GC by a margin of 43-36. The GSW bench also outscored the GC bench 27-14.

The Lady Hurricanes will try to get a conference win Sunday at the Storm Dome when they take on Young Harris. Tip-off is scheduled for 1:30 p.m.