Mike Boone led the Jets with 17 points against East Georgia

AMERICUS – Both the South Georgia Tech Jets and Lady Jets came up winners Wednesday night, January 31, as they swept East Georgia State. The Jets dominated East Georgia by the score of 95-75, while the women did pretty much the same, dominating East Georgia 54-39.

For the Jets (13-8, 6-2 GCAA), they are now one victory behind top-ranked Georgia Highlands in the GCAA standings. As for the women’s team, they remain in first place in the GCAA with a 12-1 conference record and an overall record of 20-5.

While he was pleased with his team getting another victory, Lady Jets head coach James Frey was concerned with two facets of his team’s play: turnovers and outside shooting. “We struggled in the first half with turnovers”, Frey said. “We have to protect the ball during transition. The other thing we need to do more consistently is shoot the ball successfully from the perimeter. If we start making the shots from the outside, it will open up the lane and our post players can be more effective.”

Alyssa Nieves led the Lady Jets in scoring with 17 points. Nieves was the only player to score in double-figures. Ricka Jackson scored eight points and Houlfat Mahouchiza chipped in seven in the winning cause. 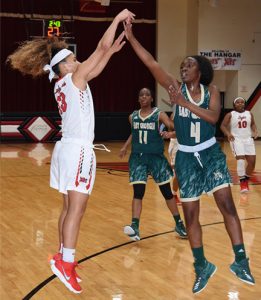 As for the Jets, they had no problem scoring as they put up 48 points in the first half on their way to a 95-75 victory over the East Georgia Bobcats. “We are playing well right now”, SGT head coach Travis Garrett said. “The players seem to have bought in. We had four guys in double-figures and we had several more that were close. We just need to continue to play and work together and get those wins.”

The Jets were up 48-30 at halftime and increased their lead by as many as 24 in the second half before salting away the 95-75 win.

Both the Jets and Lady Jets travel to Macon for a double-header with Central Georgia Tech on Saturday, February 3. Tip-off for the Lady Jets’ game is scheduled for 2 p.m., followed by the men’s game at 4 p.m.

The next home double-header will be on Wednesday, February 7. The Lady Jets will tip it off with Andrew College at 5:30 p.m., followed by the Jets at 7:30 p.m.