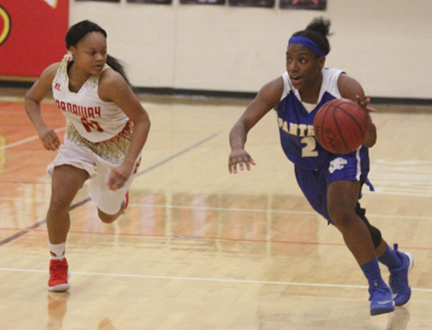 COLUMBUS – It was a game Americus-Sumter coach Sherri Harris and the Lady Panthers would like to forget. From the start, Americus-Sumter shot the ball poorly from the field and the free-throw line. As a result, they lost to Hardaway (10-14, 3-11) by the score of 37-34 Friday night, February 2, at Hardaway High School.

The loss ends Americus-Sumter’s four-game winning streak and puts the Lady Panthers at 18-6 overall and 8-5 in Region 1-AAAA play.

Jykiera Long led Americus-Sumter with eight points and Brianna Pope had seven. Shidajah Johnson and Nyja Carson each chipped in six points for the Lady Panthers. Trinity Eubanks led the Lady Hawks in scoring with 10 points.

As bad as the offensive performance was for Americus-Sumter, what concerns Harris the most about her squad goes deeper than just having a poor shooting night. “We don’t have any team chemistry right now”, Harris said. “The kids are arguing and fussing…talking back and forth. There’s no team cohesiveness. We have four seniors that, instead of encouraging our younger kids that play with them, they argue and yell at them. A lot of times, that’s not a good thing. When you’ve got young kids, their eyes are wide and they sort of don’t know what’s going on. It’s one of those things we’ve got to figure out before next week.”

It was an extremely rough first quarter for Americus Sumter. They could only muster three points in the quarter. On the other hand, Hardaway was able to jump out to a 10-3 lead by the time the quarter ended. The second quarter was slightly better for the Lady Panthers, as they outscored the Lady Hawks 8-6. However, ASH still trailed at halftime 16-11. Brianna Pope scored four points to lead the Lady Panthers in the first half. Deyanna McKinney and Trinity Eubanks each led Hardaway with five first-half points.

Both teams struggled to score during the first two minutes of the third quarter. Americus-Sumter missed several easy shots and scored three points by the 4:47 mark of the third quarter. They still trailed Hardaway 16-14. With 4:22 left in the third, Shidajah Johnson was fouled while shooting and made one free throw to cut the deficit to one. However, Delahna Moura scored to give Hardaway a three-point lead at 18-15 lead. The two teams traded baskets for the next minute or so, with Hardaway up 22-19 with 2:27 to play. ASH guard Nyja Carson was fouled while shooting and made both free throws, but Hardaway responded when Moura scored to push Hardaway’s lead back to 24-21. However, Jykiera Long was fouled while shooting and made both free throws. Then Long got a steal and scored to tie the game at 24-24 with 1:15 left in the third quarter. The Lady Hawks had a chance to hold for the last shot with 25.7 seconds left, but they were whistled for a traveling violation. This gave the Lady Panthers a chance to take the lead with seven seconds left. However, Shidajah Johnson’s desperation shot at the buzzer was off the backboard, and the teams were tied at 24-24 going into the final quarter.

During the first minute and a half of the fourth quarter, both teams struggled to score until Genesis Adams hit two free throws for the Lady Hawks to give them a 26-24 lead. The Lady Panthers continued to struggle scoring. Then Nyja Carson got a steal and was fouled while going to the basket. Carson made one of two free throws and Hardaway still led 26-25 with a little over five minutes left.

Americus-Sumter turned the ball over, and Diamond McGilberry was fouled. McGilberry made one of two free throws for the Lady Hawks, giving Hardaway a 27-25 lead. ASH had a chance to tie the game, but missed an easy shot on the inside. Trinity Eubanks got the ball for the Lady Hawks, and was fouled. Eubanks made both free throws, and the Lady Hawks had a 29-25 lead before timeout was called with 3:52 left. The Lady Hawks had a chance to extend their lead, but Ariauna Thigpen missed both free throws. ASH responded when Johnson found Brianna Pope for a layup, cutting the deficit to 29-27 with 2:57 left. A few seconds later, Thigpen was fouled again, but missed two more free throws. Jykiera Long was fouled and made one of two free throws, cutting Hardaway’s lead to 29-28.

Hardaway struggled from the line in the fourth quarter, but Eubanks was fouled and was able to sink both free throws, giving the Lady Hawks a 31-28 lead. Then it was the Lady Panthers” turn, but Jykiera Long could only hit one of two free throws. With under two minutes left, it was 31-29 Hardaway. During the next few seconds, both teams had chances to score easy baskets, but turned the ball over. With 1:16 left in the game, Harris called timeout.

Out of the timeout, Johnson drove to the basket, but was not able to hit the shot. The Lady Hawks got the rebound and moved it down the court against the swarming defense of the Lady Panthers. Americus-Sumter tried to force a turnover, but Hardaway was awarded a timeout. out of the timeout, Deyanna McKinney was fouled and hit one of two foul shots, making the score 32-29 Hardaway with around 40 seconds left. ASH had a chance to score on their possession, but Johnson was called for an offensive foul. The Lady Hawks had a chance to increase their lead, but McKinney missed both free throws. However, McKinney got a chance to redeem herself, and made her next two foul shots. With the score 37-33 Hardaway, Jykiera Long made only one free throw with two seconds left. The Lady Panthers four-game winning streak was over. They lost 37-34.

Both teams shot very poorly from the field and from the foul line. Americus-Sumter was 18-32 from the line, while Hardaway shot 19-39 free throws. The Lady Panthers had numerous chances to score more points, but were unable to do so. They will have to rebound quickly as they host Westover Saturday, February 3, on Senior Night. It will be the last regular-season game before the region tournament.